Daily art on the road


I've always believed that a successful daily art project depends on setting rules that you can live with, so for instance if you spend lots of time at your wilderness cabin where you can't get a cell or internet signal, don't choose a project requiring a daily Instagram post.  Since traveling is a big part of our lives, I need daily art that's portable.

My calligraphy project is easy to take along -- just a sketchbook plus a pen or two.  For this trip, knowing that I would mostly be in a ship cabin with a nice desk, I decided to bring along two dip pens and a bottle of ink, wrapped carefully to avoid spills and packed in carry-on luggage so it wouldn't have to endure pressure changes.  I also brought along a wire brush to clean the pen after writing.

My miniatures required a bit more thought.  Decided to bring a scissors, a glue stick, a needle and one spool of thread and a pair of tweezers.  From that point in, I had to forage for raw materials each day, a process that I find exciting.

When you go ashore from a cruise ship, which we did occasionally, you can always look for native plant life or rusty nuts and washers, but on board you generally find neither category of stuff.  So I worked mostly with paper, and that spool of thread.  One day I made paper beads, the kind where you cut a very long, skinny triangle of paper, put glue on the back and roll it up around a skewer. 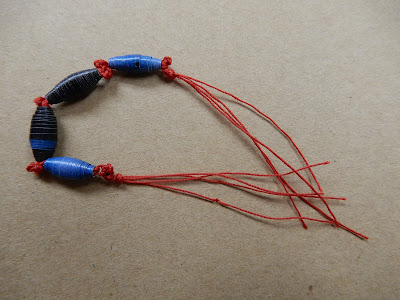 Once I made a little book out of teabag tags, with quite an elaborate sewed signature binding (if something less than an inch long can be called elaborate). 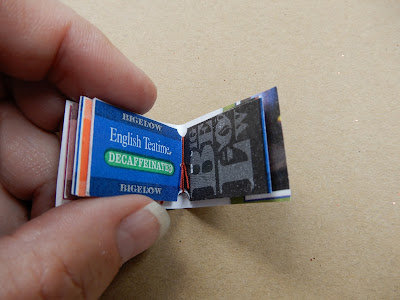 Once I made a collage depicting the beautiful sunset, finding a range of blues and purples in the newspaper I had brought aboard. 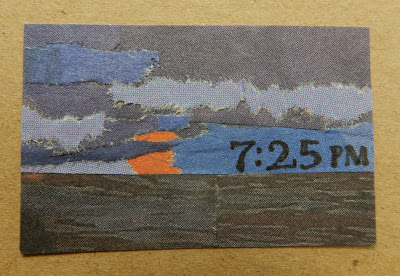 Toward the end of the voyage I was getting sick of red thread so I saved some strings from teabags,  using them in their natural white and dunking them in my ink to dye them gray. 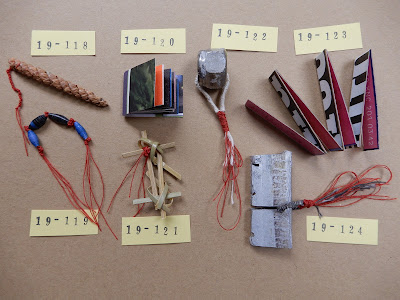 I also used the bamboo picks that held martini olives, the manufacturing dates from breakfast cereal boxes, the little card that reminded us to set our clocks forward (six times during the trip).  I only used the needle twice, once to sew my little book together and once to do kantha stitching on the fancy plastic that wrapped our silverware on the plane coming home.

Back home, it's already a thrill to use a thread color other than red!  But the fun of finding art materials in a foreign environment always gives me a creativity boost.