Actually, it's the last three weeks...

After I showed pictures of my heavily stitched houses mounted onto batik-covered panels, Sylvia commented, "They need something -- maybe a key? or some lettering?  I do like the batik background but they look unfinished to me."  And Sandy wrote, "Reading Sylvia's comment makes me think.  I agree.  Perhaps what they need is just a dark line of stitching like you did for the windows.  Sort of visually to stop the house from blending into the sky.  Or something?"

I have to say that I agree too.  The houses still look a little insipid.  But the joy of fiber art is that you never have to be finished until you want to.  I'll probably think about it and do something more, and write about it when that happens.  Thanks for your comments -- they reinforced my original gut feeling that these are not masterpieces yet.

After I wrote about my new calligraphy pen, which is prone to leaving blobs while it gracefully swells from thin to thick, my namesake Kathy wrote, "Definitely embrace the blobs!"  We share not only a name but an opinion.  I'm blobbing away (although the more I use the pen the less frequently I get blobs -- maybe practice is starting to pay off).

Mckittycat wondered if I an familiar with the calligraphy of Denise Lach.  Yes, in fact my dear friend Uta Lenk gave me a copy of Lach's book a couple of years ago, and that was part of the reason I decided to do calligraphy as my daily art this year.  I have not been rigorously going through the book and using her work as prompts, but I plan to start doing that soon.  Again, I'll keep you posted.

And finally, my friend and former student Mieke wrote that she hopes I enjoyed Amsterdam, right in her backyard.  Yes, I did!  It's a wonderful city, if you can avoid being run over by bicycles.  But in its favor, unlike in the U.S. the cyclists (a) stop at red lights and (b) don't wear spandex.  Next week I'll be writing about some of the art we saw.

Here's my favorite miniature from this week: 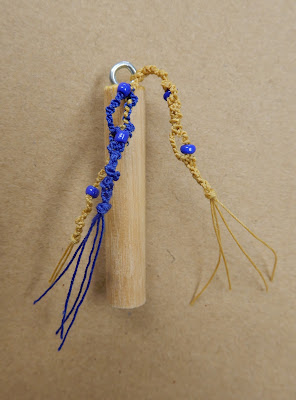 As always, you can check out all my daily art here.

Posted by Kathleen Loomis at 11:45 PM