Form, Not Function almost up at the Carnegie


This will be Year 16 for Form, Not Function: Quilt Art at the Carnegie, a juried show of contemporary quilts that I was fortunate to have helped establish.  For several years my co-members of River City Fiber Artists served as jurors for the show, as well as organizers, entry wranglers and quilt installers.  For the last decade or so it has graduated to a new-each-year panel of prominent jurors, and typically one or more of them will return to see the quilts on the wall and choose the prizewinners.

This year the jurors, Terry Jarrard-Dimond (who won best in show at FNF several years ago), Carolyn Mazloomi and Colleen Merrill, were all unable to come for the judging, so the Carnegie curator thought it would be nice to ask River City Fiber Artists to be the prize judges in a nod to our long history with the show.  Two of us who are in town this week, plus one participating by speakerphone, went over yesterday to  judge the show, and were pleased to see a gallery full of beautiful work.

Almost everything in the show is big, with only 18 pieces, compared to as many as 30 in past years.  One piece, in fact, was so big as entered that it would have required a 40-foot wall.  The Carnegie having no walls that long, they contacted the artist, Emily Bellinger, and asked if she could edit her installation to fit a smaller space.  She did, and here it is on the wall. 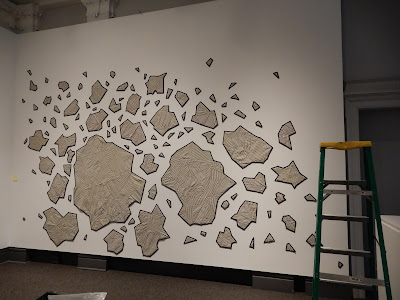 She sent installation directions, plus a photo that curator Dan Pfaltzgraf painstakingly gridded and used as a map to pin it to the wall.  Emily sent a box of 400 straight pins, Dan hammered them in (bending a fair proportion of them in the process) and only a thin layer of pins were left in the box when we arrived.  I was happy that I no longer have to be the one up on the ladder. 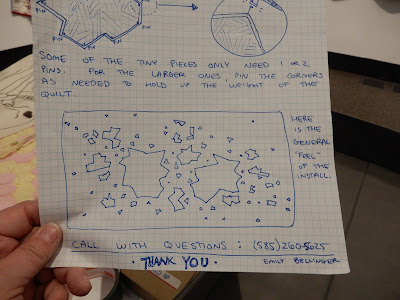 The show opens Friday night and I'll be writing about the prizewinners and some of the trends and themes we saw in this year's quilts.  Stay tuned, and if you're anywhere near Louisville between now and July 20, stop by the Carnegie Center for Art and History, 201 E. Spring Street, New Albany IN, at exit 123 from I-64, just across the bridge from Louisville.