Rounding out the list of money prizewinners at FNF: 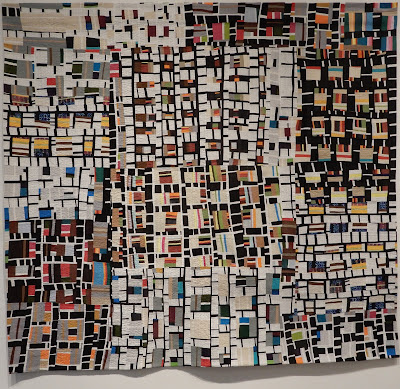 If you like obsessive piecing, you'll love this quilt!  It kind of reminds me of my own fine-line piecing, with lots of small bits surrounded and joined by very skinny strips, but Black's is less controlled, more improvisational than my own.  I spent a lot of time in front of this quilt trying to discern a pattern to the color concentrations.  And as an obsessive piecer myself, I went into zen state trying to figure out the order in which she sewed it all together!  Almost everything in the quilt is solid color, except for one or two commercial prints and a couple of batiks that read as stripes. 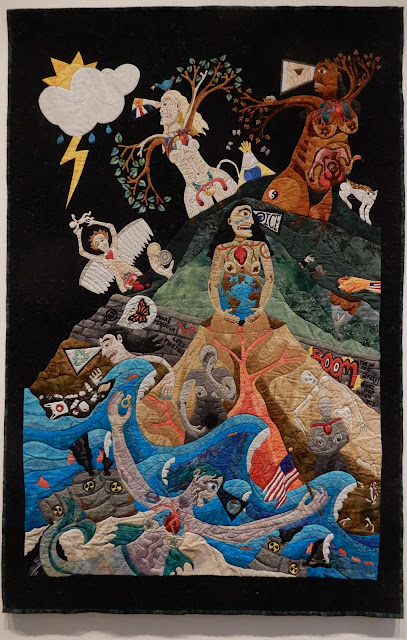 Nida's work, familiar to anybody who has attended a major quilt show in the last decade, features her trademark angst-ridden women with visible innards, plus a host of tiny details that make total sense only to a surrealist mind.  Figuring out what this quilt is about is more difficult than I have found in many other Nida quilts; it seems to have many themes, including pollution, patriotism, rape, feminism, contraception, pregnancy and windbag politicians.  And I'm sure I missed some.

I didn't inspect every seam in the quilt, but it's largely if not entirely done with raw-edge applique, zigzag stitched with invisible thread. 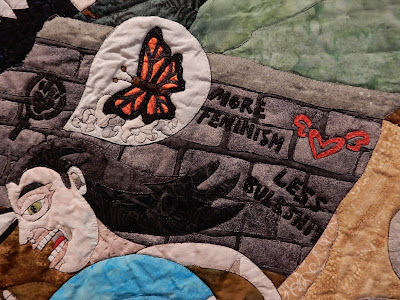 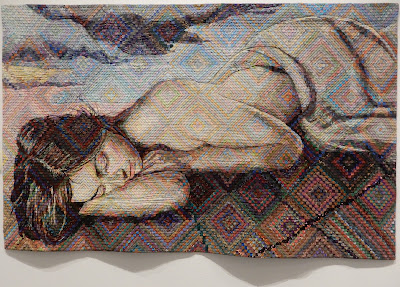 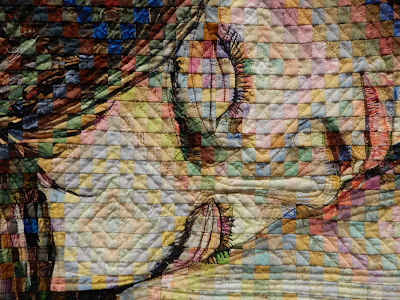 The image is entirely made up of pieced squares of commercial fabrics, cut to one inch, stitched to a half inch.  She has carefully chosen colors to create a pixelated image, but it's even better than pixels -- when she needs a color change in the middle of a tiny square, she fussy-cuts one from a printed fabric to get, for instance, a red lip divided diagonally from a dark green shadow.  Everything is done in piecing except a bit of dark threadwork on the eyelashes, brows and very fine lines of the face.

But wait, there's more!  Under the picture is a traditional Around The World quilt pattern, executed subtly in different colors of the same value.  Having once composed a fussy-cut graphic quilt of half-inch squares myself, I can testify to the tedious difficulty of getting all those squares mapped out, cut and kept in the right position as they're sewed.  This is a tour de force of piecing.

Posted by Kathleen Loomis at 9:59 PM