They say you never forget how to ride a bicycle, but I suspect that if I were to get back on a bike today I would wobble a bit before the balance came back.  Same happens, apparently, with piecing, which I haven't been doing any of in a really long time.

I started work on a quilt last week in the style that I call "Crossroads," but instead of simply making cross cuts and stitching them back together with a fine line to mark the seam, I had to get fancy and stick in little streets that didn't go all the way across.  It was great fun, until I put the whole thing up on the wall and realized that one edge looked really sloppy.  Not that there's anything wrong with sloppy, but this edge didn't go with the others. 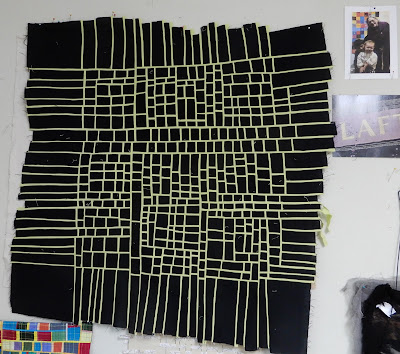 And then as I started looking more closely, I saw that top edge heading off northward on a diagonal that clearly didn't go with the pretty-much-right angles of the rest of the quilt. That's what happens when you cut by eye instead of by ruler.  I ordinarily am a firm believer in cutting by eye, but this style of piecing seems to benefit from more control.

The bicycle was wobbling, but maybe that's part of the fun.  I set about to fix things.

Concealed that diagonal swerve by putting in some properly straight streets beyond it.  I opened one of the vertical seams and inserted a street that went partway across the quilt at the right angle, then added two more lines to solidify that edge.

Then solidified the other three edges with a few more lines and some extra ladders of piecing.  Most of the extra ladders came from cutting off some of those very wide edges at left and bottom, and repositioning them on the other sides.  Just a little bit of extra piecing at the end to make things come out even. 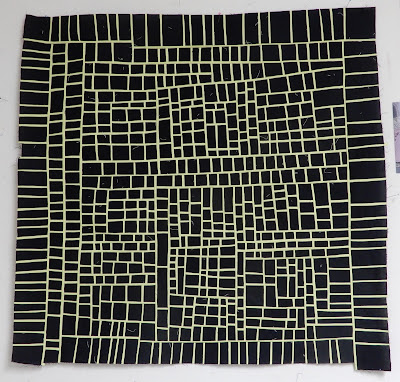 I like the way this turned out.  A little bit wonky in the center, but pulled back into place at the edges to fit the square format of the finished quilt.

Now I'm eager to get on with the next quilt!  The bike is riding more smoothly, and I don't think I'll repeat the same silly mistakes I did in this one.  And it's so good to be piecing again.


Posted by Kathleen Loomis at 5:10 AM