I bought a new computer and made an appointment with my geek to come on Tuesday to get it set up and transfer my life from the old computer to the new one.  He spent most of the afternoon here, but went home when thousands of emails started transferring and the computer estimated it would take "more than a day" to finish.  He came back Wednesday, spent most of the day, and went home to let the contents of my hard drive, including about 50,000 photos, transfer overnight.  He came back Thursday, spent a few hours, and went home thinking the job was done.

Ha ha.  I spent an hour on the phone with him on Friday clearing up some unresolved problems, plus discussing a problem that is going to require either him coming back to the house or me taking my old hard drive to  his shop.  Then Friday night I discovered that most of those thousands of emails, the ones that took all night to transfer, have disappeared from where they were on Thursday.

I'm not worried that anything is going to be lost -- I have cloud backup of the entire computer as well as the old hard drive -- but I worry that it will take another week before everything gets in order.  If I'm lucky.  Those psychologists' lists of the ten most traumatic life events (death of spouse, loss of job, house burns down, diagnosed with deadly disease) really should also include getting a new computer.

Miraculously, I have spent a few hours in the studio in between geekwatching, and may even be ready to start quilting on my latest top next week.

Here's my favorite miniature of the week, the idea shamelessly stolen from Sandy Snowden, except that she's stitching 24,000 beads into these wavy tentacles in a year-long project, while I only did about 60. 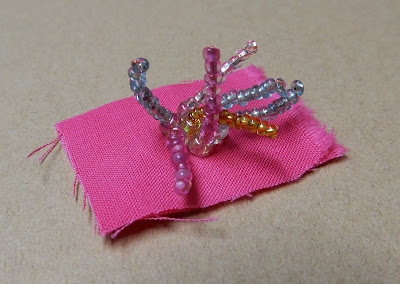 Posted by Kathleen Loomis at 11:18 PM