Faithful blog readers may recall that several years ago I embarked on a project of blind stitching, inspired by my dear friend and art pal Terry Jarrard-Dimond's workshop with Dorothy Caldwell.  Dorothy had her students put on blindfolds and stitch for a while without seeing what they were stitching.  Terry was very impressed by this exercise and subsequently she and I did a project in which each of us stitched for twelve hours blindfolded.  She did hers on white fabric, I did mine on black, and we titled the two pieces "Equinox".

I loved the unexpectedness of the blind stitching but realized that way more than half my twelve hours were spent not in stitching but in feeling blindly about to make sure the stitches were pulled fully through and not knotted around other threads.  After we finished the Equinox project I wondered how I could achieve the energy and excitement of blind stitching without spending most of my time in housekeeping.  I decided I could achieve the same effects without the drawbacks by simply stitching from the back side of my fabric.

Since then I have made four large pieces of stitching using this approach.  I will typically make cross-stitches from the back, working for a long time without ever looking at the right side of the work.  I  have shlepped these four pieces of stitching around to many, many workshops and lectures as examples of how this kind of semi-blind stitching is a gateway to exciting, mysterious effects.  A couple of years ago I took one of the four pieces and turned it into a quilt.

But the other three stayed in my work bag, ready to be stitched upon during a boring meeting.  The smallest of the three, on dark teal blue instead of black, got really dense with stitching.  When it appeared that I was reaching the end of the road, I turned it around and did some final stitching from the front of the work, adding some french knots (impossible to do those from the back) and a few extra cross stitches. 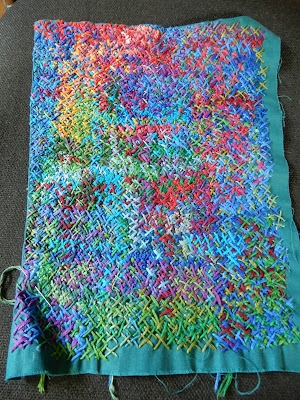 Two weeks ago I decided it was time to graduate this piece of stitching from workshop sample to finished piece.  I had carelessly left less than an inch of blank fabric around the edges, so it was going to be hard to finish this piece to the point where it could be displayed.  Decided to turn the edges under and mount it on some kind of board.  The best way to secure the narrow turned-under edges was through hand stitching, and I did that by filling in any blank spaces with additional cross stitches and french knots. 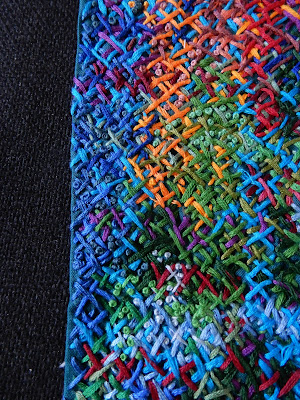 It's almost finished -- although every time I have the piece in my hands I see places where more stitches could be added.  Already dense with embroidery floss, the piece is getting denser with more and more french knots, more cross stitches.  I may just have to give myself a deadline after which no more stitching will be allowed, even if that little gap on the right side still allows a millimeter of blue fabric to show through...