A reunion with my handiwork -- too soon


Several weeks ago I wrote about making a piece of liturgical linen for my sister to give to her church, a small pall to cover the funeral urn if the decedent has been cremated.  There didn't seem to be any huge urgency in the project, but I was looking for something doable to jump start me out of a creative funk and get me back into the studio.I found an old linen tablecloth, beautifully woven with a pattern of stripes and roses (don't know if you can see them in this photo), and hemmed it. 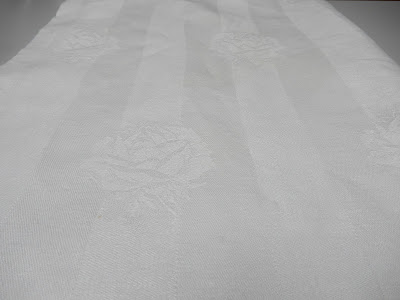 My sister was going to have a butterfly embroidered on the pall, but changed her mind and had them do a cross instead.

Much to everyone's surprise, the first user of the pall turned out to be my sister's wonderful husband, unexpectedly taken ill earlier in the summer.  After one long hospital stay and then two weeks in hospice, he died on August 6.

Here's the pall, in front of the altar at the funeral service.  (I like the cross better than the butterfly, so I'm happy they went with Plan B.) 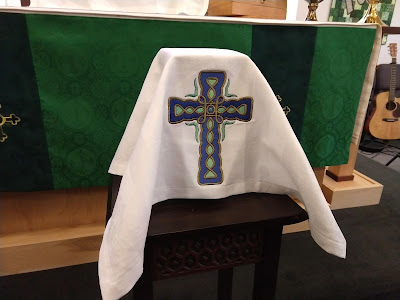 (So glad I didn't procrastinate on the project.)

Posted by Kathleen Loomis at 12:58 PM