A month ago I wrote about a quilt top that I finished piecing but wasn't happy with.  I wrote "I think it's repairable, with a lot of fussy, fiddly ripping and remaking."

Shannon left a comment: "I wonder if you would be willing to share some of your critical thought processes or just general thoughts about what makes something good or not.  I struggle with this pretty often with my pieces.  Sometimes it's very clear that something isn't good, but when it's not so obvious I have a harder time.  I also really struggle with differentiation between pieces that are "good" and pieces that I just like.  I would love to hear your thoughts on this!"

I promised that I would talk more about this top, what I thought was not-so-good and how I fixed it, and last week I finally did pull it off the design wall and worked on it.

Here's the quilt in its original state, in mid-July: 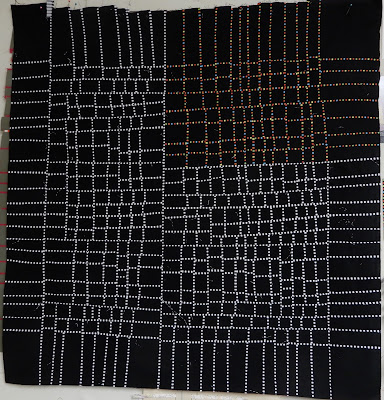 When I evaluated the top, I realized I liked the inset effect of the multicolored lines in the northeast quadrant, but there were two parts of the composition that seemed weak.

In fine line quilts, of which I have made upwards of 40, I like the offset zig-zag effect that happens when you slice across an older seam and the two sides slip a bit before you sew them back together.  To me, that's the magic of this construction method (I even named a sub-series of these quilts "Fault Lines" because they reminded me of how the earth slips a bit in quakes).  But as more and more lines cross one another, the grid gets sloppier and sloppier.

So when I looked closely at this top, I realized the balance was off between the zig-zaggy lines of early seams and the straight lines of the latest seams. 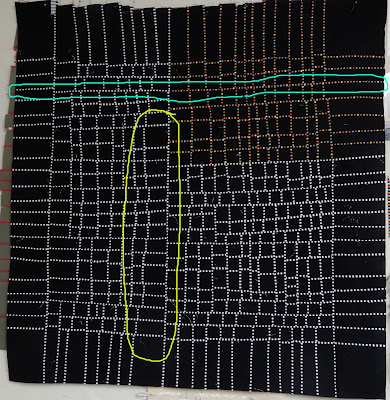 First, I didn't like the wide area shown in the yellow circle.  It seemed too blowsy, too wide compared to the closer grids in the rest of the quilt.  I didn't like the contrast between the straight line on the right of that area and the wobbly line with multiple offsets on the left.  Worse, the straight line on the right went smack across the entire quilt, which emphasized its straightness.

You will notice that farther to the left is another wide area, with a looser grid than in the other three quadrants of the quilt.  But that one doesn't bother me, probably because it's near the outer edge of the quilt.

When I look at these designs I often see city maps, and I guess as you get toward the outskirts of town you expect the street grid to break down and the "blocks" to get bigger, but the yellow area, right on the main drag of this "city," bothered me.

How should I fix that?  I finally decided that the simplest way was to add another vertical road through the middle of the blowsy area, so it wouldn't be so wide and call so much attention to itself.

My second complaint was that vertical line that went clear across the quilt from top to bottom with no offsets.  I had originally planned that the fine line that went horizontally, shown in the blue circle, would be stitched back together with an offset where it crossed the vertical.  That would have put a zig into that long vertical line.  But I was careless in sewing, and the vertical line ended up just as vertical as before.  Yes, I noticed it at the time, but decided it was good enough.  (Bad decision.)

When I came back to reconsider and remake the top, I took the blue-circled seam apart and restitched it, adding the offset that was supposed to be there in the first place.  It would have been simpler to make this fix had I not compounded my initial sloppiness by slicing across the seam at the blue arrow.  I had to take apart the left-hand vertical seam, then make the cut-off segment longer so I could offset the blue-circled seam toward the right.  But when it got all sewed back together, the long vertical line in the center of the quilt now had an offset.

Then finally I added three more lines along the outer north, east and south edges.  I like the crossroads to be squared off; I think it makes the composition look more finished and balanced.  And the line at the north edge allowed me to put one more zig into that main vertical line, breaking it up a little more. 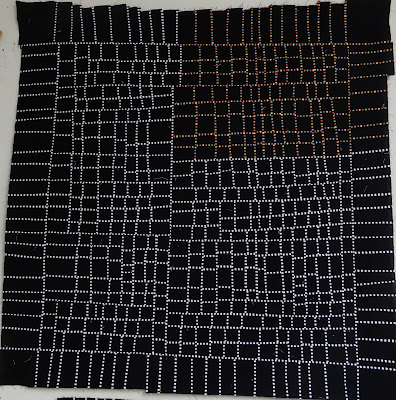