Daily art on the road 1 -- miniatures


I have always defined my daily art with the full knowledge that we like to travel, so my projects have to be portable.  Since we were decadent and took lots of luggage, I would have been able to take even more supplies than I did, but there's a certain excitement in working with constraints.

For my daily miniature, the rule is that I have to make something to pack into a tiny 1 1/2 x 2-inch plastic bag (no fair just picking up a piece of stuff).  So I needed some tools and supplies: 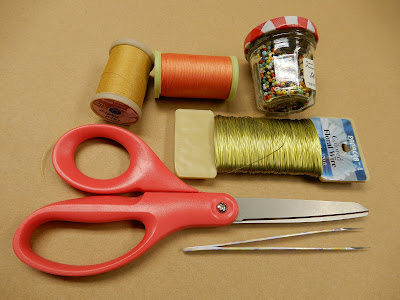 Two spools of thread (on our last long vacation I took only one and got a little bored, so I splurged this time), a little jar of seed beads in assorted colors, some wire, scissors and tweezers.  A needle, which I neglected to put in this photo.  And a glue stick, which expired en route and did not come home with me.

But I augmented these sparse supplies with a lot of stuff that I found along the way.  For instance, here are the miniatures I made during the week of October 20: 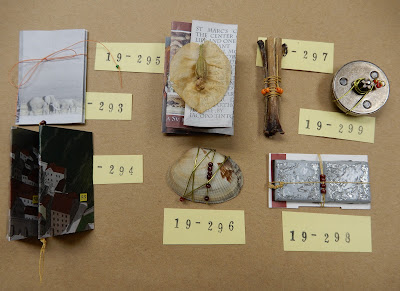 Three little books made from paper acquired along the way: a flyer from the jewelry shop on board (no, I don't remember why they had elephants on the cover); a map of  Kotor, Montenegro; and the admission ticket to a tiny church in Croatia with a Tintoretto above the altar.

Four found objects tied up with wire or thread, embellished with beads:  some nicely shaped twigs, a clam shell from the bouillabaisse dinner, two metal doodads found on the docks.
Nothing from this particular week, but sometimes I would make elaborate knotted constructions, especially on days when we watched a movie in the cabin and I needed some handwork. 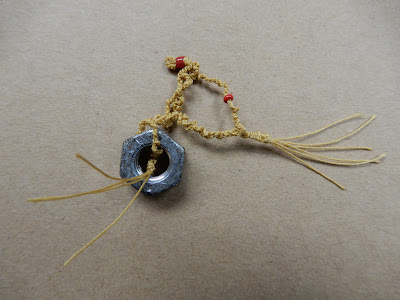 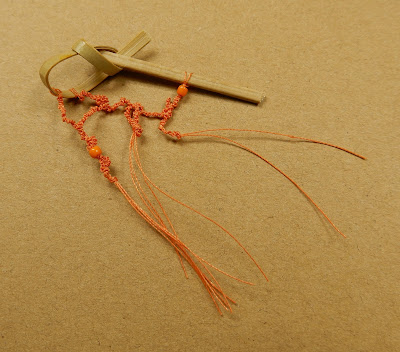 I like working with constrained supplies; it forces me to be creative and attentive to my surroundings.  So I have always found my travel days to be particularly enjoyable as I try to find something new and different for daily art.  Yes, there are times when I get sick of the only two colors of thread that I brought along (that's when I start using the string from the teabags).  And yes, there are times when today's miniature looks a whole lot like yesterday's.  But that's part of the game.

Posted by Kathleen Loomis at 3:18 PM