Last month on Art With a Needle


Faithful readers with not enough to do may have noticed that my usual "last week" posts, always done late on a Saturday night, have been missing in action for a while.  That's because I have just spent four blissful weeks on a cruise ship, neglecting my blogging simply because it's too much work to do it via phone or kindle without regular internet access.  So here's a catch-up post.

We flew to Rome on October 15, spent one night in a waterfront hotel in the port city of Civitavecchia, and boarded our ship on Friday afternoon.  Eleven days poking about the eastern Mediterranean, visiting small port cities in Croatia, Slovenia, Montenegro, Greece, Malta and Italy, then back to Civitavecchia before heading west, stopping in Spain and Madeira before going to Florida.  The ports where we made day stops were kind of second-tier tourist attractions; nothing much to write home about unless you had been a devotee of Game of Thrones (we weren't) and liked Dubrovnik, the old city where it was filmed.  Mostly our routine was to go ashore, stroll about for a while, find a sidewalk cafe and drink a beer before returning to the ship.  Low-key, but totally satisfying.

For us the best part of the cruise was not the shore visits but the sea days, with nothing to do and nowhere to go except two classical music concerts with a piano quintet (two violins, one viola, one cello, one piano).  I read 15 books in 26 days and took naps (I caught a cold midway through and was wiped out for a week).

We sat on our balcony a lot, enjoying the balmy weather, smooth seas and mesmerizing sea -- or on days in port, watching the parade of people, vehicles, containers, boats and ships on the dock below and in the water. 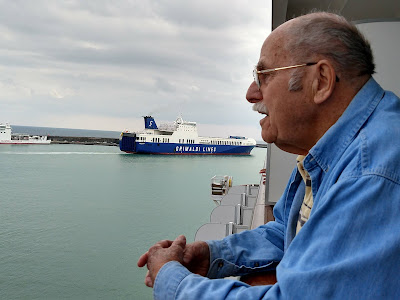 The last stretch of the voyage, from Madeira (off the coast of Africa) to Fort Lauderdale, was seven days, during which we had to adjust for five hours time difference.  That meant five 25-hour days.  Considering that the Sunday in November when we go off daylight time and get back our extra hour has always been my favorite day of the year, this was heaven on earth.

I did my two daily art projects every day -- I'll write later about how that worked out -- but other than that, just relaxed.  No cooking, no housework, no telemarketers.  What could be better!

Posted by Kathleen Loomis at 9:21 AM