Daily art on the road 2 -- calligraphy


As we set off on our cruise I planned carefully for my daily art projects; before we left I hit the art supply store and bought some new pen holders and a couple of nibs to complement my existing supplies, plus two new bottles of ink.  After we got on the airplane heading for Rome, after dinner, I hauled out my sketchbook and pens.  But when I fished in my carry-on for the ink, it wasn't there.  I searched.  I searched in the other carry-on.  No luck.

TSA must have seized the ink -- even though each bottle was well under three ounces, and they were sealed in a regulation-size baggie.  Usually they will tell you when they confiscate your stuff (I sometimes think they really like that part of the job) but I figured it happened while I was tediously taking off my orthopedic boot to be separately screened and even more tediously replacing it.  I cussed and muttered, and found some gel pens in my art box to do that day's writing.  I fretted about how nasty it was going to be using just those two pens for a whole month -- and one of them was already starting to run out of ink.

The next morning, after we got off the plane I googled "art supply stores in Civitavecchia" and found one within (long) walking distance of the hotel, but it turned out to sell housepaint, not artist things.  I cussed and muttered.  But then I happened upon a stationery store in the same block as the hotel, and they had a big display of pens.  I bought half a dozen (and later wished I had bought even more). That got me through a lot of daily calligraphy, although I still cussed and muttered every time I saw my unused pens and nibs in my box. The days when I wrote passages from the books I read were particularly frustrating.  I have become enamored of the flexibility of the dip nibs that give the beautiful thick-and-thin strokes, and writing with a plain old round penpoint seemed graceless and without character, even if the colors were beautiful.

On many days I would write many layers of script, so densely packed on the page that you just see color rather than words. 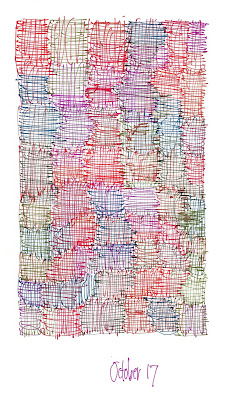 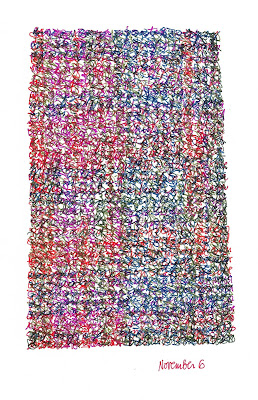 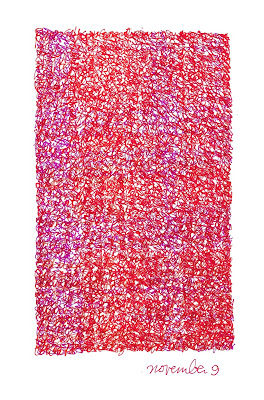 Other times I would revisit my old "cascading letters" drawings. 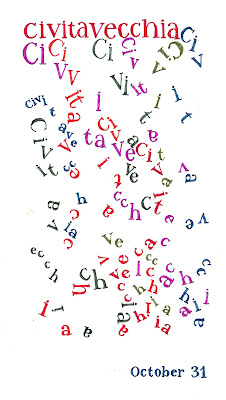 About halfway through the cruise I had a brainstorm -- I brewed up three teabags in about a half-inch of boiling water, and after it got good and dark I stashed the cup in a drawer to evaporate and, I hoped, get even darker.

Several days later the tea was getting dark and sludgy, but it seemed too gooey to use with a pen.  But wait -- here's a brush in my art supply box!

The first couple of days, the ink was still pretty pale. 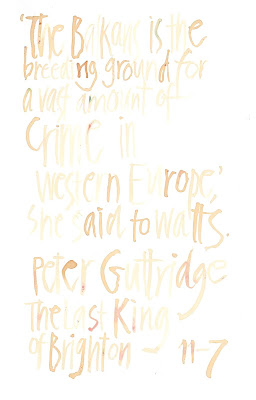 But by the end of the cruise it was darker, and I had learned to put a second dab of tea over the letters before they got fully dry.  Of course, just when it was getting good, it was time to leave and I had to pitch my homebrew. 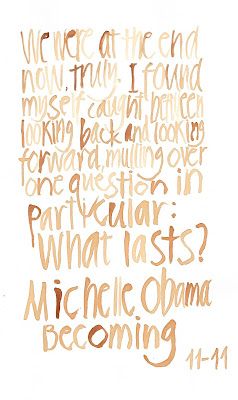 Much as I cussed and muttered about losing my ink, and was frustrated and bored with using the plain-tip pens, I was happy doing my calligraphy every day.  Almost to the end of the year, and I still have a thrill each day when I open the sketchbook and select my pen and my text.  And working under the constraints of very limited supplies did inspire some creativity, which was fun.

P.S.  When we got home last week, what did I find on the kitchen counter but a little ziplock bag with two bottles of ink.