Bethany G left a comment on my last blog post: "I would LOVE to have you share your Cranberry Orange recipe -- my mother-in-law made it every year for the family and I would dearly love the recipe.  She passed before I asked."

Bethany, I am thrilled to share my recipe, and embarrassed for you to see that there's really no recipe involved.  The secret ingredient, so to speak, is the meat grinder in which it's prepared.

All you do is take some cranberries, and some oranges, and run them through the grinder on the large aperture.  You mix it all together and add some sugar.  You let it sit in the fridge for a couple of days if  you've had the foresight to make it in advance, or just eat it if you haven't.  That's it! 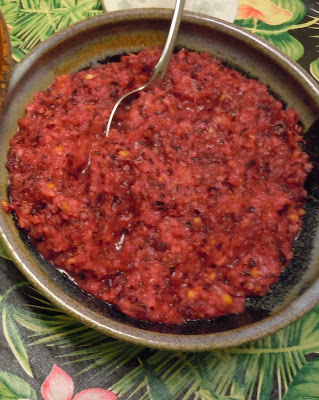 Always use navel oranges, because they have no seeds. Sometimes I get fancy, carefully peeling off the zest, then taking off and throwing away all the white spongy pith.  The zest and the meat of the orange  go into the grinder.  Sometimes, though, in a hurry, I have just thrown the chunks of orange into the grinder as is.  I suppose the pith makes it a little more bitter, and a little lighter in color, but I have never had anybody spit it out or fail to take seconds.

My usual modus operandi is to grind up all the berries, then start adding oranges.  Every now and then, stir up the stuff in the bowl and see what color it is.  If it's too dark, add another orange.  The color in the bowl in the photo above looks pretty good (although ideally there would be more visible chunks of orange peel, as in the photo of the relish in jars).  But if it were a little darker, or if it were a little lighter, that would be pretty good too. 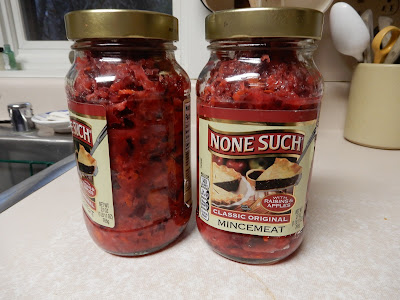 Some years I have thrown in a bit of ginger root.  The grinder would let it go through in bigger chunks than you want, so it needs to be chopped very fine on the cutting board and added to the bowl at the end.

So how much sugar, you ask?  There too, I can't exactly tell you.  Cranberries are very tart, so you need a fair amount.  But some people like more and some like less.  As the sugar infuses into the relish, the taste changes, so I always start with less than I think I might need, and stir well, and then taste again after a few hours in the fridge.  Sometimes I'll add a bit more sugar every day till it's time to eat.  With two pounds of cranberries I would probably start with a half cup of sugar, maybe less.

But what if I don't have a meat grinder, you're fretting?  Then, lady, I don't know what to tell you!

When my sister and I left home to establish our own kitchens, we each grappled with the existential dilemma of how to make cranberry-orange relish without Mom's meat grinder.  We tried various methods, such as zapping in a food processor or chopping with a knife, and while they all tasted fine, the texture wasn't perfect.  Fortunately I inherited the meat grinder when our parents downsized, so for many years I've been making existentially perfect relish and my poor sister has been SOL.