As I have done for at least 40 years, I'm making ornaments this year.  In the beginning of this project, my work time was focused on coming up with a new idea each year, and in a good year, adding one or two people to the list -- new in-laws, new babies, new friends.  Lately it's a good year when I don't have to take someone off the list, and in this year of pandemic, it's especially heartening that I haven't lost anyone. 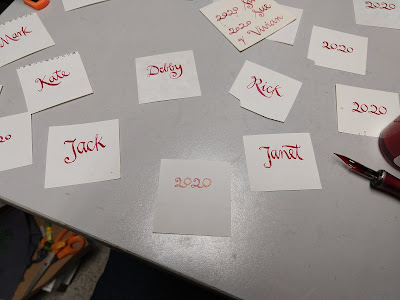 My daily art for the last two years has been calligraphy, so it's probably no surprise that I'm writing the names for the ornaments.  I usually just do initials, plus the year, but on the infrequent occasions when I've spelled out full names, I've never done so with a writing implement!  So, a first this year (hard to accomplish when the series has been going on for so long).

I visited my friend Marti last week and was delighted to find that she has hung all the ornaments I've given her over the years in a place of honor, pinned to a beautiful pale green quilt that she made.  This will be year #22 that she's been on the list, a long time and so many shared memories.

I left it too late this year, should have started my ornaments in October as it became apparent how unreliable postal service has become of late.  I got the two international envelopes in the mail a couple of weeks ago, but the US batch won't go till tomorrow morning.  Fingers are crossed for all of them to arrive on time.  Or if they can't get there for Christmas, at least before New Year so the "2020" won't be a lie.

Posted by Kathleen Loomis at 2:50 PM