The angels get a new home, and landscaping

One nice thing about holiday traditions is that they can change over the years, with new elements added by chance or by plan.  Two years ago, when Vivian was pretty small, she was learning the names of birds and animals, and for some reason "owl" was early on the list.  One of my friends had given me a little owl made out of kimono silk, and sure enough, Vivian knew that it was an owl, and she wanted to carry it around.

After we put the Christmas decorations out that year, she was carrying the owl around one day and decided to put it with our three little gnomes, Herman, Sherman and Vermin, who always stand on the window sill.  And it fit so perfectly in the group, thanks to the googly eyes, that now the owl is packed away with the gnomes and comes out with them at Christmas, and I was pleasantly surprised to see that this year Vivian remembered exactly where they go. 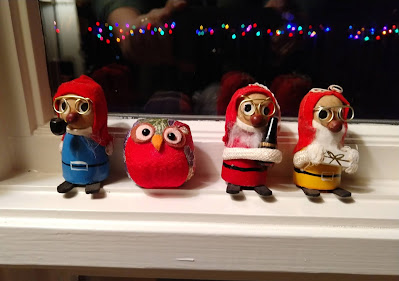 When I was about ten years old my godmother gave me a set of little wooden angels, probably made in Germany, who made up an orchestra.  I've been setting them out at Christmas ever since.  As my own children, and now my grandchildren got to the right age they would be in charge of arranging the orchestra.

Some years the angels have been arrayed on the piano, some years on top of the radio, once or twice on the bar, or this year, on the chest of drawers in the living room.

This is the first year Vivian has been old enough to set out the angels, and I explained that they all have to face the conductor.  She did it that way, and then she noticed the little stitched house that has been sitting on the piano for several months since I finished it.  She thought the angels ought to have it so they could go inside after the music was over.  And she was right -- it's the perfect size (if you put bunk beds inside). 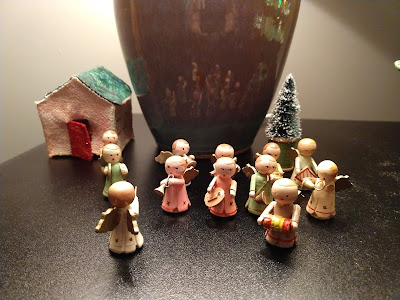 Then a few days later my husband found this little snow-covered tree-on-a-spool hidden on a shelf in the kitchen, where it has sat for years since somebody gave it to me (I wish I could remember who that was...).  He wondered what it was and I said -- it's a tree!  And I put it with the angels too, right by their new house. 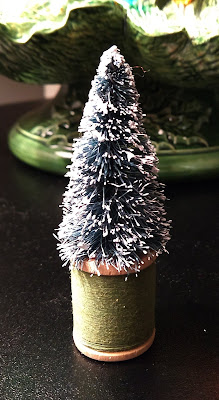 Posted by Kathleen Loomis at 10:13 PM