The Norton Simon Museum in Pasadena is a strange place: it contains the formerly private collection of Simon, a fantastically rich dead dude, who toyed with giving his art to various existing museums but apparently couldn’t stand the thought of anybody else touching it. So he bought a financially struggling museum, took it over, spruced up the building, hung his stuff on the walls, provided a huge endowment and told them not to buy anything new, ever. A few random donations aside, that’s pretty much what happened. As a result the collection is largely frozen in time and reflects Simon’s personal tastes, which were strong and idiosyncratic.

He loved Degas, and the place is packed with paintings and more than 100 little bronze ballerina sculptures. Excellent collection of impressionists, not much really new art, but a spectacular trio of paintings by Sam Francis hung at the far end wall of one of the wings so it called to you the whole time you made your way through the other galleries. Lots of very old European art, which except for the Rembrandts I breezed through to have more time with the newer things. I totally skipped the huge collection of Indian and Southeast Asian artifacts in the basement. (When you’re on a group tour and the bus leaves at 3 pm you have to set your priorities!) 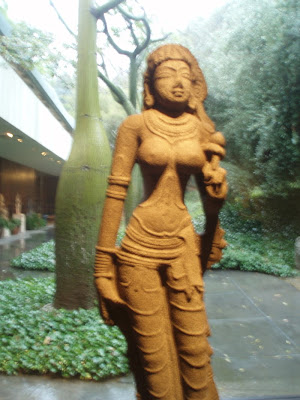 Simon adorably attributed his own success to "power, publicity and paranoia" and you can still detect those traits by visiting his museum. Especially paranoia.

We showed up at the museum an hour before it opened, and there were three or four docent tours going on for groups. Each group was trailed by a glum security guard who looked like a former Stasi agent and gave you the hairy eyeball should you try to hold back and look at a painting instead of trooping on to the next room. The security guards were even glummer when it got to be lunchtime and we had to sit outside in the monsoon to eat (god forbid they might drag some tables into the lobby to accommodate their paying visitors). Two guards stood guard outside while about 20 of us huddled under a canopy and ate our damp sandwiches. Somebody had thoughtfully put a couple of those big propane heaters out on the patio, but had unthoughtfully neglected to gas them up sufficiently. When asked whether the heaters couldn’t be turned back on, the guards “explained” that sometimes they didn’t work. Of course they did not go for help, lest any of us vandalize the potted plants in their absence.

It was pouring when we left the museum and it was amazing how far away the bus had to park, because of course no buses could be permitted into the parking lot or driveway. Probably because you could pack a bus with explosives and storm the building. Neither could visitors be let out through the staff entrance 20 feet from the bus parked at the curb.

In the Simon’s defense, I must commend their excellent wall labels, which gracefully and economically covered artistic design, art process, artist biography and overall cultural context. And of course the art was spectacular. 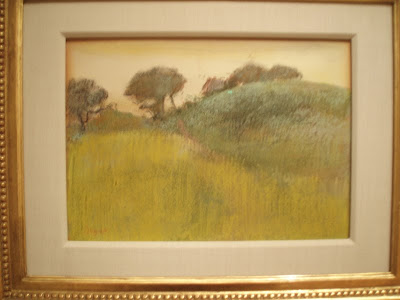 I never think of Degas as a landscape painter, although apparently he did some in later life.  The notes said that he started by making a monoprint of tha pale yellow background, then worked over it in pastels. 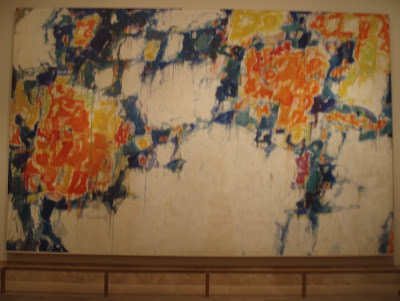 A special exhibit of portraits was far more interesting than I had anticipated, as generally I don't like this genre of pictures.  But the wide variety of artists, subjects, mediums and artistic approaches made it exciting.  One of my favorites was this one of Van Gogh's mom.  One of the ladies from my group said to me as we both looked at the painting that she didn't like it, because the poor woman has a green face.  (That's probably why I liked it.) 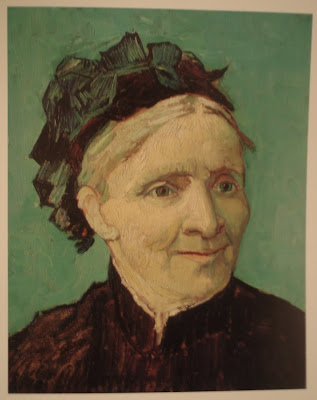 Posted by Kathleen Loomis at 7:33 PM