All artists, whether Leonardo or you and I, have the same question - what shall I make art about?

Sometimes that's an easy question to answer - if Francesco del Giocondo calls you up and wants to commission a picture of his wife, and you need the money, you paint "Mona Lisa."

But most artists have to answer the question on their own, and some do it more successfully than others. In today's world, artists try to establish their own voice, an overworked word that encompasses, to a degree, their subject matter, their medium, their style, their theme.

Voice is what enables us to walk into the museum and from across the room distinguish Jackson Pollock from Franz Kline, or into Quilt National and distinguish Pam RuBert from Inge Mardal and Steen Hougs.

I believe that the artist's career goes through three stages. First, you learn the basics -- how to use your medium and your tools. Next, you find your voice. Finally, you make good work.

This is overly simple, of course. All artists change their voice and their focus over time. And many successful artists have multiple voices and multiple bodies of work going on at the same time. But I believe that too many voices at the same time can create cacophony rather than harmony.

For those of us who don't have the genius of Leonardo, who after all was a painter, a sculptor, an architect, a musician, a scientist, a mathematician, an engineer and a writer (among other things), I think we need to limit the number of balls in the air. I have been asking myself for the last year or so whether it's counterproductive to work in two different voices.

My first voice, which I have thought of as my "serious work," consists of pieced quilts, like the one below. They use traditional quilt techniques, feature very fine pieced lines and are heavily machine quilted. 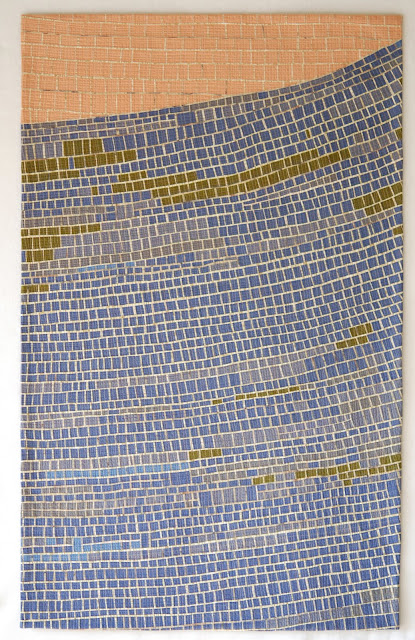 My second voice, which I have felt slightly guilty about (because it takes me away from my "serious work," consists of nontraditional work like the one below. It is constructed out of hundreds or thousands of small, messily stitched bits of fabric about the size of postage stamps, held together in a stitched grid. 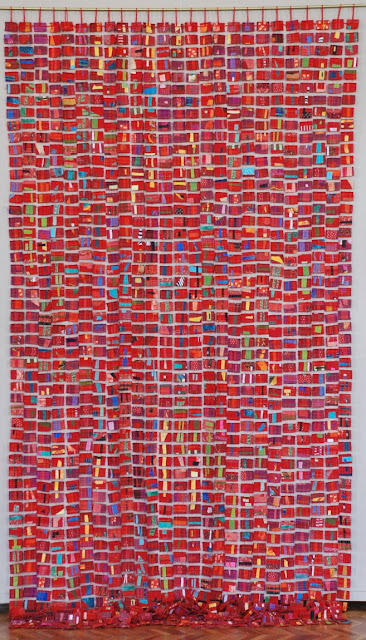 I've had a lot of success with the second voice, winning a big prize at Quilt National and getting accepted into Fiberart International 2010. But I don't want to abandon the pieced quilts, because they represent a huge body of technical prowess that I have accumulated over many years and that I am proud of. Besides, in this day of fusing and surface design, I believe that piecing is an endangered art, and I feel almost a religious obligation to keep practicing it, since so many others are falling away to less tedious techniques.

Recently I came to a realization (rationalization?) that both these voices are saying the same thing. I can describe both bodies of work the same way: they're about a myriad of small bits, joined by fragile connectors. Under that heading I can talk about our decaying infrastructure, or our frayed social bonds, or the stresses on our environment, or the toll of war, all of which I like to comment on.

But I digress. I want to talk not just about me, but about the general process of finding one's voice, and I have some ideas that might help you find your voice, too. Stay tuned. Details at 11.
Posted by Kathleen Loomis at 2:32 PM