Judy Kirpich commented on my blog the other day about suffering "the Post-Quilt National blues."  (The receive-by deadline was a week ago today.) There's always a reaction when a huge deadline has been met -- sometimes you feel down, sometimes you feel downright giddy, sometimes you feel like doing something totally off the beaten path.  I got together with two friends last weekend who had also devoted considerable effort to their QN entries, and we decided that we're going to schedule a serious party in future years to celebrate our passage of this milestone.  In 2012, according to current plan, we're going to Marfa, Texas and see minimalist art.

But this year I felt a certain exhilaration about finishing my QN work, and as I stowed my QN paperwork into my orange show entry folder, I noticed another call for entries that I had printed out some time ago and stuck into the same folder.  It was at a regional museum, the 55th year of this juried all-media show.  Well, not exactly all-media -- they specified no photography and no fabric art.

Earlier I had read these rules and decided that if they didn't want "fabric art" I didn't want to enter their show.  But this week I was feeling giddy, the entry fee was only $15, and it seemed like a lark to try to get some of my collage work into a show for the first time.  I decided to make a new piece, started on Tuesday, and by last night had it finished and ready for photography this afternoon (postmark deadline tomorrow).  Besides, by making art I was justified in postponing my studio clean-up.

It wasn't that herculean an effort -- I went back to my calligraphy practice sheets, tore them up into bits and mounted the bits on a pre-stretched canvas.  And just because they said no fabric art, I decided to sew on it as an in-your-face gesture.  For the second entry, I hauled out a small collage I had made last year, using an old book cover as the support, spiffed it up just a bit and sent it in too.

I suspect this is $15 down the drain, but I like to think of it as my contribution to the art scene.  And it certainly is nice to be able to produce a show entry in three days rather than three months, as with my QN quilts.  I'll keep you posted, but for now I'm feeling pretty cheerful, no post-QN blues at all! 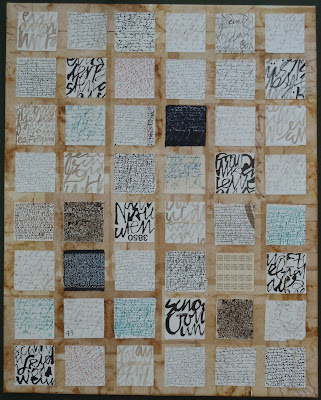 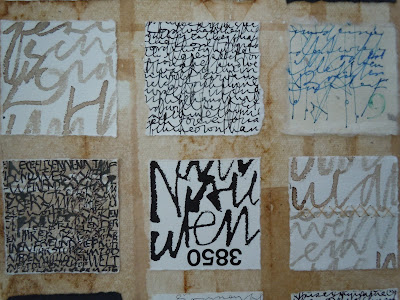 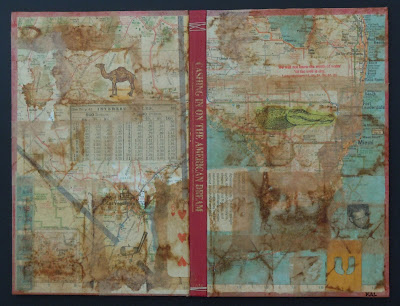 Cashing In on the American Dream -- detail below 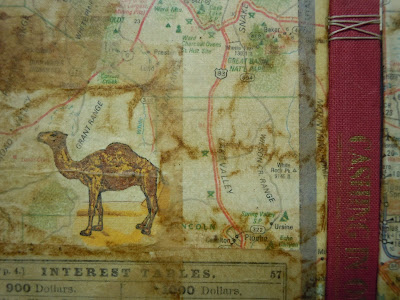 Posted by Kathleen Loomis at 8:35 PM