What is a series?

That's the question du jour on the Quiltart list.  It's a subject dear to my heart because I believe that working in series is the best, perhaps the only way to progress as a serious artist.

The questioner asks "What constitutes a series? Meaning style, technique, number of pieces."

I say a series is a collection of works in which each individual piece after the first derives in some way from the ones that went before.

Here's an example from my own work.  I have a series called "Crazed" in which lots of little pieces are joined in strips like bricks with mortar in between.  As you analyze the construction method, there are two elements: the bricks and the mortar.  The first piece in my series has three sectors; each one has one color for bricks and another color for mortar. 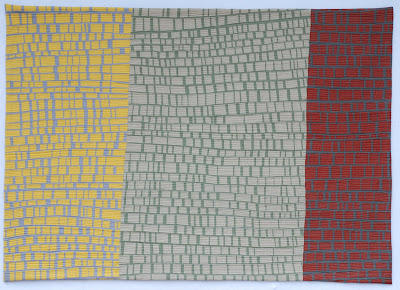 The second piece has one color for bricks but two colors of mortar. 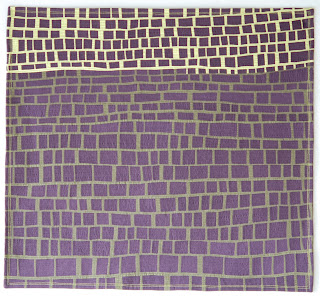 The third also has one color for bricks but three colors for mortar. 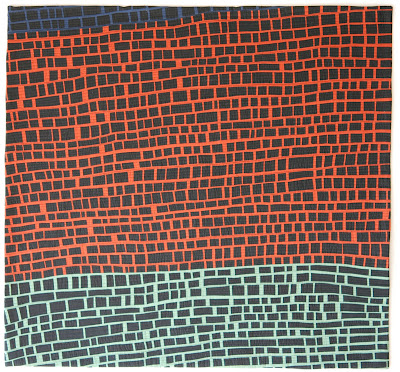 I've just finished number 10 in the series.  I won't show all the quilts, but here's how they vary:

Crazed 4 and 5 each have one color for mortar and many colors for bricks.  Crazed 6 has two sections, each with the same mortar but two different brick colors.  Crazed 7 also has two sections, one with one brick and one mortar, the other with several bricks and several mortars. In Crazed 6 the boundary between the two sections is jagged; in Crazed 7 it's a smooth curved line.  For the first time, Crazed 7 uses commercial prints for the mortar.

Each piece in the series is a variation on what came before.  The plan for Crazed 4 and 5 (one mortar, multiple bricks) is the mirror image of the plan for Crazed 2 and 3 (one brick, multiple mortars).  Crazed 4 and 5 have the same plan but one is high contrast and the other is low contrast.  Everything from Crazed 6 on experiments with breaking up the neat rows of bricks for a more random arrangement.

Not sure where the series is going to go now that it's in double digits, but I will use my general approach: evaluate each piece and decide what worked, what didn't work, and where I had to choose between two equally appealing alternatives.  For future pieces I will repeat things I liked from previous works, avoid things I didn't like, and try out the alternatives that I didn't do before.

For instance, Crazed 9 uses commercial stripes because I loved the way they looked in Crazed 8.  And Crazed 10 is a diptych because Crazed 8 was so huge it nearly killed me to quilt it and I resolved to quilt my next large piece in smaller sections, and sew them together later.

Back to the original question: what does a series need in terms of style and technique?  I say you must be able to articulate what elements of style, technique, subject matter or whatever are included.  For me, the characteristics of this series are that they're pieced and they use the brick-and-mortar format.  But your series might have much different characteristics.  For instance, it might constitute family pictures incorporated into  landscapes that you execute through silkscreens, fabric paint and machine threadwork.  It might constitute abstract whole cloth designs made with a certain silkscreen and embellished with hand stitching.

It's up to you when your work starts to change enough that you think it's time to start a new series -- perhaps when the family pictures start to concentrate just on your mother or when you switch to a new silkscreen design.  However you articulate the differences, you're the judge of which works fall naturally together.

Finally, how many pieces make a series?  Two.  But I think you'd be silly to stop at two.  The serious learning doesn't start until you have worked again and again to explore your chosen territory and make the most of it. Nancy Crow is over 100 in her Constructions series, and still working.  I would not abandon a series until I'd done at least three, and then since I'd already invested so much in it, I'd make sure I know why I abandoned it.  In future posts I'll show you a couple of series that I have either abandoned or put on hold, and tell you why.
Posted by Kathleen Loomis at 4:14 PM