Just before I went to the Quilt National opening weekend, I spent a week studying with fiber artist Dorothy Caldwell.  Dorothy told us about a huge project she is winding up, which included a trip to the Australian outback.  One of the aboriginal practices she learned about and shared with us was the concept of "singing a journey," in which a song exists to describe the landmarks along any route you might need to take.  As you sing the song, it will tell you, for instance, to turn left at the funny-looking tree in front of a big black rock.  And if you have been singing at the right tempo, when you get to that part of the song, sure enough, there's a big black rock in front of you.

Inspired by this concept, Dorothy made some stitched pieces that depict landmarks along a journey, a long strip of fabric with the appropriate pictures and symbols to guide a traveler.  We talked about this concept at some length in the workshop, since one of the participants was working with maps.

So imagine my delight to arrive at the Dairy Barn and find a very similar piece on display, made by Elizabeth Brimelow. She had originally made the quilt to be very long and narrow to fit in a specific spot up a staircase in a show that was canceled before it ever was hung, leaving her with a beautiful piece and nowhere to put it. To fit the Quilt National size requirements, she wound the piece around an armature (it is two-sided in this format). 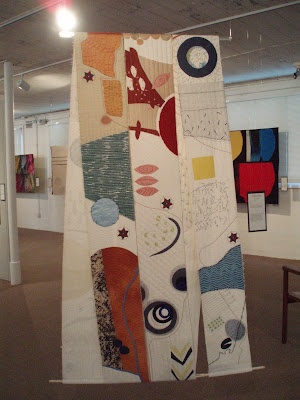 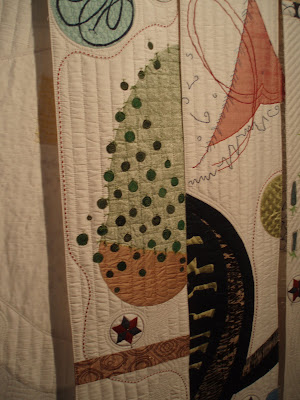 Elizabeth modeled her piece on the first road maps of England, published in 1675.  The maps were made in scroll format for stagecoach drivers, who could unroll them on their laps as they drove.  As with the aboriginal journey lines, these maps used symbols and pictures.  Her quilt depicts the path taken by flocks of rooks that fly over her house twice a day, going to and from their feeding areas on higher ground.

I guess the moral of this story is that there's nothing new, just recurrences of the same things here and there in time and space.


Posted by Kathleen Loomis at 6:07 AM