My daily art project for this year is hand stitching.  I work on four-inch squares of Kona cotton (because I have boxes and boxes and boxes of the stuff in many different colors) and the rule is to do some kind of stitching.  So far I've always used embroidery floss, but that wasn't specified in my rules so perhaps I'll experiment with other threads as the year goes on.  Or not.

Now that I'm halfway through the second month, I thought it might be time to let you know how things are going.

Some days I have made pictures relating to something I did, saw or learned that day.  For instance, on January 1 we were cruising at Santarem, Brazil, several hundred miles up the Amazon.  At Santarem (as at many other places along the Amazon) there's a phenomenon called meeting of the waters, where the blue Tapajós flows into the muddy brown Amazon.  The two colors of water don't blend for several miles, so you can see a distinct line down the center of the river. 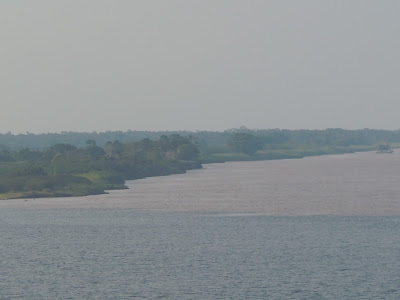 Here it is in embroidery. 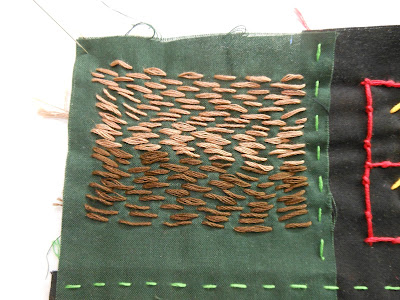 Another day on our cruise we heard a lecture on the mating habits of birds and how the males put on various shows of plumage, song or behavior to prove their superiority as potential mates and fathers.  Our lecturer told how male ospreys will catch fish, hold them under their bodies in aerodynamic position, and fly around in front of the females who sit in trees and watch the show. 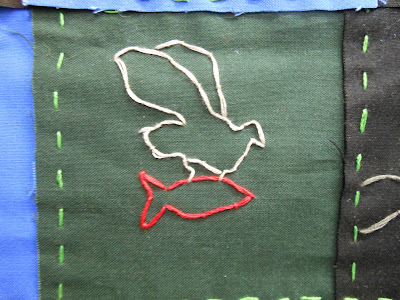 Here's the square from my friend's birthday. 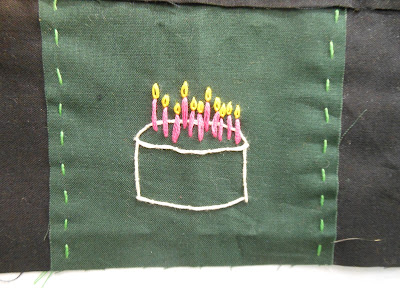 I'm finding these picture embroideries challenging, since I can't draw.  But it's also kind of freeing to work without a cartoon, just making marks directly on the fabric (no guidelines allowed).  And I've given myself permission to look crude and primitive.

I'll write later on some of the non-pictorial squares I've made so far.