Last week Tom Lundberg, whose embroideries I've seen in many books but never in the flesh, was in town as a visiting teacher at the University of Louisville School of Art.  In addition, the school has an exhibit of his work, and he gave a lecture.

Lundberg describes his work as "small-scale narrative embroideries" but the narrative is often difficult for the viewer to discern.  Often the imagery suggests stars, planets, space and sky.  In the lecture, he shed some light on a few of his favorite recurring motifs such as the foot and the sandal.  The footprint, he said, is a portal into a new space; the sandal brings to mind taking one step on the way to change. 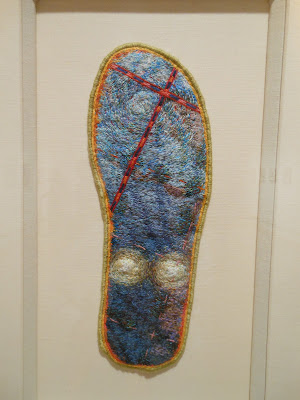 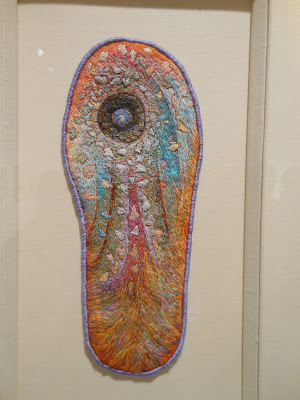 
I am always intrigued by the recurring images that many artists use in their work.  Something strikes a chord, and then before you know it, it comes back again and again. 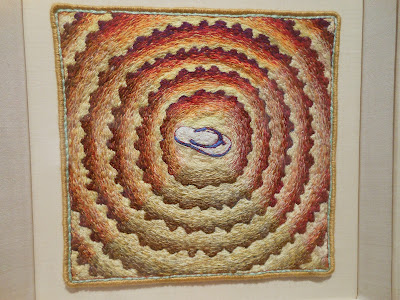 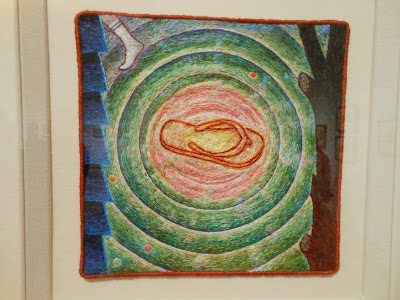 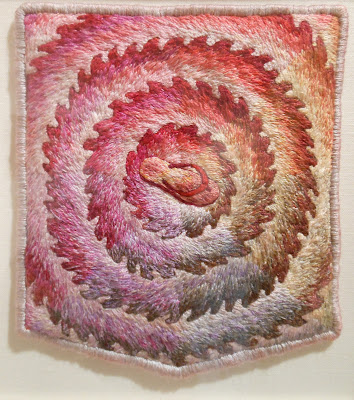 Lundberg said that over the years he has realized that "my home base is a really small space."  Most of his embroideries are about the size of an outstretched hand and many are shaped like pockets, cuffs and other clothing elements.  On a few occasions when he has tried to work larger, he often is dissatisfied and cuts the work into smaller pieces.

All his work is hand-stitched, very densely so no glimpse of the background fabric is visible.  Interestingly, Lundberg's visit was part of an ongoing program for three-dimensional artists, and he said he was delighted to realize that his work, barely a quarter-inch thick, could be classified as 3-D.

The show will be on display through March 25.