Pennies from heaven, aka creativity

This week our local fiber and textile arts group heard a presentation on creativity by Dr. Annette Allen, a poet and professor of humanities at the University of Louisville who has studied creativity in many different artistic disciplines.

Many of her comments struck chords with me and other listeners, since we have all wrestled with the issues of how and why we make things and why some times it's easier than others.  I was taken by her remarks that creativity has been a subject for argument for millenia.

Plato thought that creativity or inspiration came from outside the individual -- from a muse or a divine power.  He sometimes described this as "divine madness" and believed that works of art are unpredictable.

By contrast, Aristotle thought creativity or art was mainly a case of craft at work.  Creation is a straightforward process of making a plan and then executing it upon some material.  It's a process that can be explained in terms of psychology and nature. 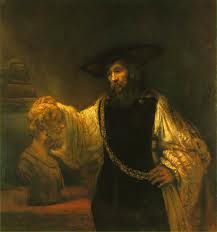 Dr. Allen asked us which camp we fell into, and the group consensus seemed to be somewhere in between. We believed that there is often a spark of inspiration that comes from somewhere outside ourselves, but that you do have to sit there and do the work.

I think I'm way more toward the Aristotelian end of the spectrum.  I may have had one or two Platonic moments when inspiration struck, seemingly from the blue.  But upon closer examination, in retrospect I realize that the "inspiration" was just a happy combination of subjects I'd already been thinking about, techniques I'd already been exploring, skills I'd already developed.  Then one day, it all came together.

It seemed like magic, or divine madness, or whatever you want to call it, but never would have happened without the groundwork.