I'm finally at the tail end of what has been a long summer chained to the sewing machine.  I've made four large quilt tops and quilted three of them, often in nine- and ten-hour days at the machine.  While I have on the whole had a good time, else I would have gone to Scandinavia with my husband and son instead of staying at home to sew, there were many hours in which it seemed a lot like my previous life of paid tedious labor except without the pay.

I continually had to bribe myself to stay at work.  "Finish this section of piecing and then you can work on your blog."  "Quilt as far as the row of pins and then you can stop for the night."  "Sew till the opera is done, then you can eat some watermelon and read the newspaper. "  "Get the entire worktable cleared off and then you can check email." 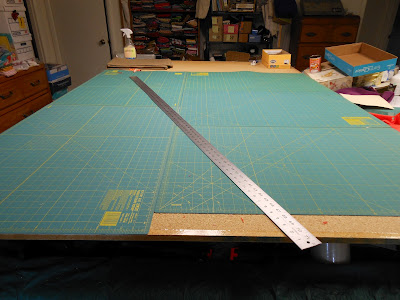 I would find myself inexplicably away from the sewing machine.  One minute I was sewing away like a good girl, the next I was taking the clean laundry out of the dryer and folding it.  Or I was in the kitchen fixing a little snack.  Or I was playing spider solitaire.  How did I get there?  Why did it take so much effort to pry myself out of these other places and get back to the studio?

This doesn't happen so much when I'm piecing.  By contrast, I often go into a zen state in which time passes without my noticing, when I suddenly realize it's way past time to fix dinner or go to bed.

For me, the quilting is work.  It's physically taxing, it's relatively mindless, and it goes slowly.  I need something to think about (because there are no decisions to be made) and to distract me from wanting to go eat watermelon and do a sudoku.  The finishing -- blocking, trimming, sewing in facings and sleeves, is work, too, but that's a mere fraction of the time it takes to quilt, so I don't mind it quite so much.

Last week I was with a bunch of artists talking about work.  We discussed how we all embrace our respective processes, whatever they are, and we make art because we love the making.  But we agreed that some parts of the process are more fun than others, while some parts are just plain work.  And we agreed that depending on the medium and the process, we all have different moments that seem more like fun, and that seem more like work.

My friend the paper artist wrote me afterwards, "thinking about your comments about the part of our art-making that is "work:"  for me it's when I must glue cut paper elements to a surface.  It just takes a lot of concentration, time and care, no emotion, no intellect to speak of, no woo-woo from outer space."

For painters, I suppose it might be stretching the canvas or applying the seven coats of gesso; for ceramists, I suppose it's cutting and smacking the clay to get out all the bubbles before you can start to sculpt.  Another fiber artist friend was complaining to me about the long stretches of her process where all the decisions have been made and she just has to sit there and knit stitch after stitch after interminable stitch.

But that's OK.  I tend to think -- my protestant work ethic rearing its head? -- that if we didn't have to put in the work along with the moments of sheer joy and inspiration, the end product wouldn't be nearly as good.  Unearned income just doesn't seem as precious as that made from hard work.  The challenge is to remember, during those hours of work, why we're doing it, what vision we are trying to make incarnate, maybe also what we'll do different next time...  And to come up with plenty of bribes to ourselves to keep the seat of the pants in the seat of the chair.

I guess there's a reason why we talk about "works" of art rather than "whimsies" or "games" or "woo-woo from outer space" or even "gifts from God."