Cathy's questions went on:  "What motivated you to start, and what keeps you going?"

This question needs a long answer.  At the beginning of 2010 I had decided that my daily art project for the year would be to take a photo every day.  I'd done daily art projects for most of the past decade, and had become more interested in photography since I began carrying my camera along on long walks.  So on January first I started taking photos, choosing the best one for the day, and putting them into a folder on my computer. 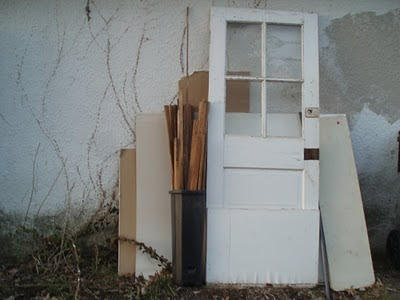 Later that week a dear friend came to visit me and after I described my new project and showed her the first half dozen photos, she asked me what I was going to do with them.  I said I didn't know, maybe print them all out and bind into some kind of book, maybe something else, but I didn't have to decide just yet.

Snow had fallen overnight and the steep hill leading to our cul-de-sac was impassable.  We certainly weren't going anywhere for a while, so we sat at the computer and she patiently walked me through every step of the way, from choosing a title to setting up a design template to deciding every detail of how the blog would operate.  By that afternoon, I had posted the first week of photos, along with a discussion of why I love daily art and why I chose this project for the new year.

Amazingly, several people read the blog post and left comments, which is like the rush from one's first experience with addictive controlled substances.  Oops, you're hooked!

At the start I didn't have any concept of what the blog might contain except for my daily photos.  But soon I realized I had something to say about another subject, and wrote about it.  A couple of weeks later we went on a museum trip to Los Angeles and I figured I'd write about the art we saw.  And so I oozed from a daily photo blog to a blog about many aspects of art.

What keeps me going?  Again, there's a back story.  When I retired from my day job in 2000 I resolved that I would now be an artist.  I spent most of the decade turning that boastful bravado into reality, and realized that I had developed a whole lot of opinions, expertise and insight that probably had some validity.  I had always been an active participant on the Quiltart list, sharing my thoughts on a wide variety of subjects with 2,000 or so of my closest friends, and moving those ideas to a blog was an easy transition.

But it all boils down to one thing: knowing that somebody out there in cyberspace is reading.

You hate to admit that you're a whore for comments, but it's true.  I have spent more than 40 years writing things that have been cast upon the waters, whether in a daily newspaper, a corporate newsletter, an email listserve or now a blog.  No matter what the medium, you always wonder whether all your hard work has been in vain, whether your ideas have actually connected with another person out there.  I suspect I've connected with tens of thousands of people over the years, but the evidence of that is skimpy.  I saved every one of the (relatively few) compliment letters that came to me in my journalism and corporate communication careers, but if they numbered more than 100 I would be surprised.  I do know that almost 2,500 people have left comments on my blog in the last two and a half years, which makes me feel both proud and humble.

I bet that every other blogger will, if put to the third degree, agree with me that comments are the food that sustains us.  I try to be as generous in leaving comments on other blogs as I can, knowing that we all write to connect with other people.  And I will admit that the first thing I check in the morning when I turn on my computer is the comments page, to see if anybody has responded to what I have posted recently.  If this makes me sound like Sally Field before the Oscar was awarded, then so be it.

I write because I must, but I write for you.  I am profoundly grateful that you read it.

Posted by Kathleen Loomis at 6:44 AM