Several years ago, when the terrorism witch hunts were more heated than now, I started to make a quilt prompted by the huge program of warrantless wiretapping of everything and everybody in sight.  I called the quilt "Intercepts" and it consisted of a bazillion bits of speech, in different languages, most of them so fragmentary that you could have no clue as to what you were overhearing.

My plan was to cover a very large piece of fabric with these intercepted messages, then sew and sew and sew and sew over the top of it to hold everything in place and evoke the complex web of connections between people in a global communication system.  I delved into my boxes of selvages for a lot of the messages, and found many others in fabric that I have bought over the years with type and alphabets.  I also lettered a lot of them myself. 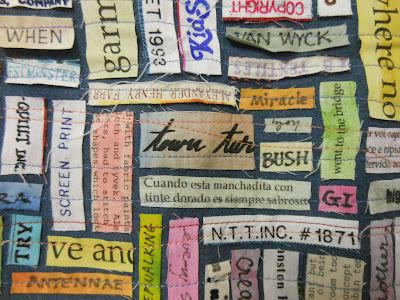 I had a lot of fun composing the little bits into an overall array, and worked systematically to keep the pieces perpendicular.  I sewed for a long time. The quilt was going to be about 55 inches square, because that's how big my base fabric was.

I was pleased with the piece and thought it would be successful, but after a while I stopped.  I can't remember what distracted me, but one day I packed everything up neatly, put it in a box and stowed the box in my closet.

Last week I was reading about the new SAQA show called "Text Messages."  Each quilt has to include "at least one visible letter or word."  All quilts must be 24 inches wide, but can vary in height from 24 to 60 inches.  This call for entries seemed to have my name on it, because I love art with text, and have made many pieces with letters and alphabets.  But I have a bunch of other projects looming in the next couple of months and didn't have time to embark on anything major.

It occurred to me in the middle of the night that the quilt I had started long ago might be dusted off, completed and work for this exhibit.  I couldn't remember exactly how far I had gotten before stowing the project away; maybe I was halfway there.

To my delight, I found the box, right where I expected it to be.  When I unpacked it, it looked just as classy as I had remembered it, which isn't always true in work you put away a long time ago.  And guess what: it measured somewhere between 24 and 24 1/2 inches across! 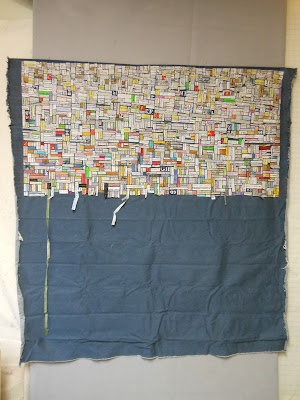 So turn it 90 degrees, cut off the extra base fabric, and it's almost done.  I guess the gods of artistic creation want me to finish this piece and enter it in the SAQA show.  Now I'm just sewing and sewing and sewing to fasten the intercepts into a global web.


Posted by Kathleen Loomis at 6:01 AM