We, the people get our day

Today I will be out of pocket until just after sundown.  Starting well before dawn, I will be spending  13 hours participating in the most sacred activity of my belief system, the apex of its liturgical year.

I will be a polling place worker on Election Day. 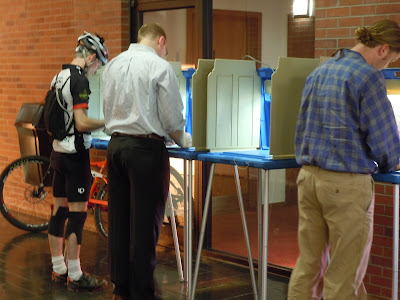 While I share with many of my fellow Americans despair and frustration over the degradation of our political process, I love my country.  I revere its democratic laws and traditions.  I regard its Constitution as the highest and best incarnation of political idealism in history.  And I believe that when we vote, we honor everything that we hold dear.

Voting is a rite both symbolic and substantive.  On 364 days of the year, Mr. Billionaire has a far louder voice in the public policy debate than you and I do, but today he stands in the same line and uses the same pencil as we do, and you and I can outvote him.  We may not be able to stop the K Street lobbyists, the frequently cynical and occasionally venal politicians, or the noxious campaign lies and pandering, but we can elect people who will push and pull the nation in the direction we prefer.

I wish we could rise up and overturn the Citizens United decision, whether by constitutional amendment or a more enlightened Supreme Court.  I wish we could replace the electoral college, carefully designed as a storm barrier to protect the presidency from unmitigated democracy (and unfortunately, continuing to perform that way centuries later).  I wish we could energize the young people of this nation to exercise their voting power and stomp on the selfishness of the geezer generation, we who are so willing to defend our hard-won Social Security and Medicare by throwing the kids out of the sleigh.

Not sure those things will occur in my lifetime, but I still have hope that our system will wake from its slumber and return to its glorious roots.  It's hope in the future, and faith in the underlying soundness of our Constitution and our nation, that gets me out of bed at 4:15 AM to spend the day at the polls as an acolyte in the sacrament of our democracy.

I hope that every one of you who is able to, will vote today.