If you have listened to much classical music, you're probably familiar with Haydn's Farewell Symphony.  It's a clever piece in which one by one, the musicians stop playing, put their instruments away, and leave the stage.  Finally there's only one violin playing, and when he finishes, he blows out the candles and leaves too.

It was written as a not-so-subtle hint from Haydn to his employer, the Prince of Esterhazy, who had packed up his entire court, including the orchestra, to spend the summer away from Vienna at his country estate.  Months passed and the employees were getting really antsy to go home, but the Prince apparently was having a good time and not yet ready to change his venue.  The farewells in the symphony were code for "Hey, boss, enough already!  It's time to get out of here!!"

It worked, and the Prince dismissed the players to go back to town and their families.  But meanwhile, Haydn had come to terms with the isolation.  Because he was totally out of touch with the sophisticated music world for those long months, he later wrote, "I was forced to be original."

While many quilters were in Houston earlier this month, and now are blogging about all the neat things they've seen, I've been home, thinking about that remark by Haydn.  I love to go to quilt shows, museums and galleries, each with its particular set of attractions.  I always come home with my head spinning, full of ideas and connections, on an adrenaline high.  But it's a tossup whether that energy will translate into a burst of productivity in the studio, or leave me too excited to accomplish much of my own work.

I think it's excellent advice to artists that they should look at other people's art, and that they should seek out companionship and support from other artists.  I do a lot of that myself, whether in person or indirectly.  Technology and the internet have made it possible to be in close contact with artists around the world, whether you make them your virtual friends or simply keep up with their work.  And the old-fashioned ways such as library books are still as valid as ever. 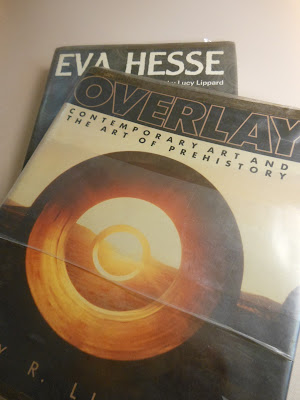 But maybe there comes a time when you have to just go into your studio all by yourself and make art.  For all you lucky enough to go to Houston this year, that's your challenge.  For those of us who stayed home, that's our challenge too.

Posted by Kathleen Loomis at 5:54 AM