One of the popular fault lines between traditional quilting and what I hate to call art quilting is the issue of craft.  Traditional quilters, so the cliche goes, care far more about perfect workmanship than they do about design, while artists supposedly are willing to settle for inferior technique.  I don't think that's a fair generalization, and exhibit 1 for the prosecution is not, as you might expect, evidence of superb craft from art quilters.  No, today my gripe is with inferior craft among the traditional crowd.

I showed you some photos a couple of months ago of a quilt that my sister and I made for her grandson. She had it quilted by a longarm lady who worked with her local quilt shop, but it came back to me to put on the binding.

The last time we had such a situation, I was crabby with the longarm lady because the quilting stopped so far from the edges of the quilt.  I had to spend an hour meandering swoopy curves to fill in the outer three or four inches before I could even start on the binding.  This time the flaws were somewhat different. 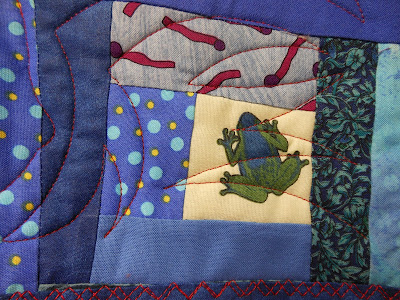 Yes, there were places where the quilting didn't come very close to the edge, but I used the largest empty area to put in our initials and let the rest stay unquilted. 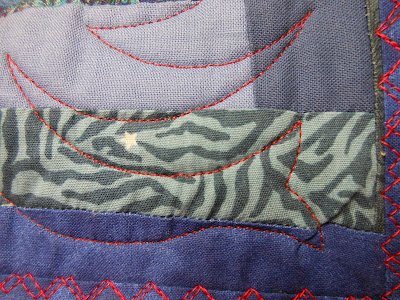 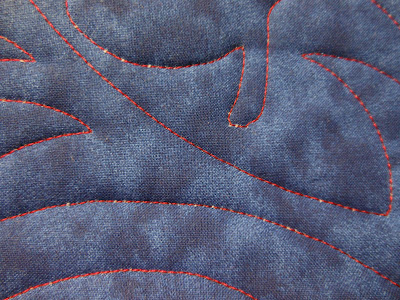 I wasn't happy with the pleats caught into the quilting, or with the bearding on the back.

And then I realized that the backing fabric looked awfully familiar.  Sure enough, it was the same 90-inch- wide fabric that I had bought some years ago at a quilt show from a vendor who specialized in longarm quilters.  I used it as the back of a huge quilt that's now touring in the Color Improvisations show, and in fact had used a few leftovers from that fabric on the front of this new quilt, which you can see in the photo with the pleat.

With the earlier piece, which I free-motion quilted, I had a terrible time with skipped stitches, which I attributed to the backing fabric.  I suspect it's a tightly woven fabric with a lot of sizing, which should be great for longarm quilting, but it sure didn't work out very well on the baby quilt.  Or maybe it was a dull needle.

I'm disturbed when the purveyors of a service that should be of the highest quality let you down.  And I'm sure it's not just my sister's jobs that got done with not a lot of attention to detail.

Perhaps some of the problem comes with the computer programs that guide the quilting -- the program doesn't know how to take special care at the edge of the quilt to make sure the stitching goes all the way out.  One might think that's what the longarm lady could tend to personally, but not this time.  Or the last time.

Perhaps it's a flaw in preparation -- an extra couple of inches of waste fabric could have been stitched around the edges of the quilt to stabilize them in the frame, thus preventing pleats at the corners and allowing the computer-driven stitching to extend beyond the edges.  (It's much easier to apply binding if the top is quilted all the way to and off the trimmed edge, rather than ruffling out in the last inch or so beyond the stitching.)

Perhaps this is just a mediocre quilter, unwilling to take the time to get the details right.  But if so, she's enabled by the quilt shop that keeps recommending her to their customers.

I don't know enough about longarm quilting to put my finger on the problem, but I know enough about craftsmanship to be disappointed.  Since so many people outsource their quilting, I wonder whether there's a whole world full of quilts with pleats and bearding and ruffles.  If so, then maybe over the years that old cliche about traditional quilters having such great technique will go away.

But to end on a cheerful note, I was happy with the quilting pattern -- a frog, to echo the frogs at the center of each log cabin block.  And once or twice, the quilted frog was perfectly positioned outside the printed frog!  Maybe the longarm lady was attending to detail after all. 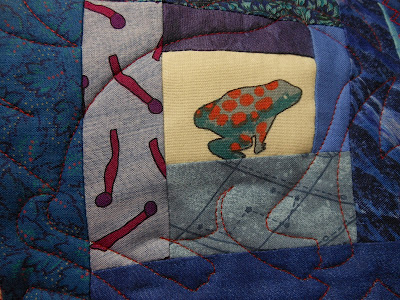