The challenge of challenges 2


For many years the American Quilter's Society has sponsored an annual contest, "New Twists on an Old Favorite," in which they specify a traditional quilt block and invite people to do variations.  In 1999, the first year I participated, I made a quilt from the Kaleidoscope block. 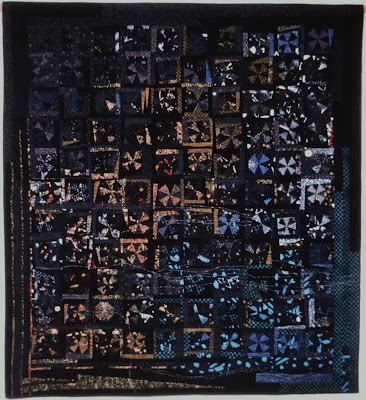 I apologize for the lousy image, digitized from a slide.  The black-on-black is difficult to photograph and some day I should probably reshoot it.  Every piece of fabric is a print with a black background; it's enhanced with lots of shiny threads as quilting and couching, and a bunch of subtle embellishments such as beads and turquoise bits.

It was magnificent, one of the best five quilts I've ever made.  I entered the contest with high hopes, but the quilt wasn't accepted.  (When I saw the exhibit of quilts that were accepted, I was annoyed.  About half the quilts were indeed twists on the traditional Kaleidoscope block, but the other half weren't.  Instead they were 10-segment designs resembling the patterns you see in a kaleidoscope.  Yes, they both have the K-word in common, but only half fit the contest rules.)

I was unhappy, but fortunately the rejection came a couple of days before the deadline to enter the regular AQS show in Paducah, so I sent my slides off to that bunch of jurors.  The quilt was accepted and won a $1,000 prize.

The next year, the traditional block in the AQS contest was Bear Paw.  I liked my last year's black-on-black "space quilt" so much that I decided to make another space quilt for the contest.  Again, I found lots of prints with black backgrounds and enhanced them with metallic threads in quilting and couching.  But as the quilt neared completion I got cold feet.  I convinced myself that either this quilt wouldn't be accepted, or if it was, the exhibit would be tainted as it had been the previous year with quilts that didn't even follow the rules.  So I didn't enter.  However, the quilt was pretty damn spectacular. 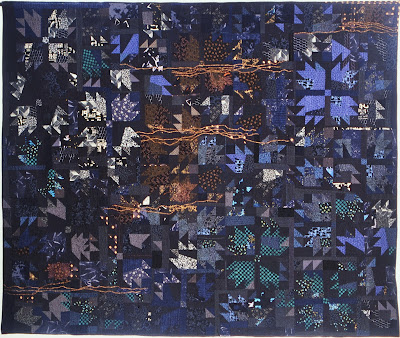 Although my record in the exhibit was now 0 for 2, I had two magnificent quilts to show for my efforts.

Apparently not remembering the first part of that sentence, the following year the block was Seven Sisters and I made a third space quilt.  Again, every fabric in the quilt was on a black background.  But reason prevailed after I had finished the top but not started quilting it.  At that point I decided that the New Twist contest was not for me.

I had only been rejected once, but I had been closely watching the quilts that were accepted and decided that the jurors' ideas of what fit in their show was different from my ideas of what I wanted to make.  I suspect this assessment was half truth, half rationalization.  But in any case, I couldn't summon up the energy to finish the third space quilt in time for the deadline.  Nor have I finished it since, even though I think it had promise.

I think I had realized that what I could do and what I should do were two different things.