Back in school -- cultural identity in art

This week in art history class we read about cultural identity and how artists in the third world may have a hard time deciding which elements to incorporate into art.  Should they use their traditional religious or tribal symbols or the more recent historical artifacts and political ideas that stem from colonial or post-colonial days?  In a world of global connections and universal communication, it's hard to separate out what the artist wants to say about his own culture from the influence of other cultures.

Coco Fusco, a Cuban-American artist and scholar, wrote, "In such a state of things, the very notion of cultural purity can seem like something of a nostalgic fantasy...  No longer bound to a sense of having to restrict one's focus, materials, or genre, many contemporary artists of color move back and forth between past and present, between history and fiction, between art and ritual, between high art and popular culture, and between Western and non-Western influence.  In doing so, they participate in multiple communities."

I am not a person of color, but it occurs to me that the same observations apply as I think about my own cultural heritage -- white flyover-state Protestant -- and how it affects my art.  And one of the things I wonder about is how rarely I see that cultural heritage expressed by contemporary artists in non-ironic terms.

Hundreds of artists have sneered or laughed at the white-bread American culture; almost the entire genre of Pop Art in the United States is based on simultaneous fascination with and disdain for the familiar stuff of our childhoods. 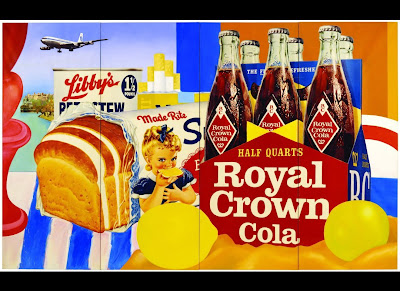 But do any artists deal with this material in earnest?  In the 1930s Grant Wood, Thomas Hart Benton and other Regionalist artists did, depicting small-town scenes and heartland values, but Regionalism went out of fashion after World War II. 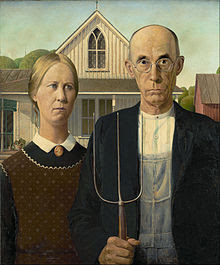 
(When American Gothic was first exhibited, some big-city critics assumed it was meant as a satire of narrow-minded rustics, but Wood said it wasn't.) 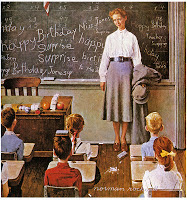 More recently, we can point to Norman Rockwell and Andrew Wyeth, but neither of them were totally embraced by the High Art establishment.  Rockwell was generally dismissed as an illustrator, and Wyeth because he seemed dangerously close to illustration.  And of course who can forget Thomas Kinkade, Painter of Light, who became fabulously rich and later went bankrupt producing sappy scenes of little cottages in the woods, sold through franchised galleries.  I'm not sure there's anybody more despised and reviled by the art establishment.

And yet, if High Art frowns on earnest depictions of heartland America, heartland America returns the favor.  Another of the scholars we read this week observed that the concept of art as a self-sufficient activity based on aesthetics is peculiar to Europe in the 19th and 20th centuries.  In other cultures, the visual tradition is determined by religion, commemoration, representation and other factors.  I would argue that heartland America is more this way than it is like Europe in terms of art.

In heartland America there is some reverence for the pretty landscape painting, the picture of Jesus, the wedding photos and the family portraits, but a great deal of suspicion of Artists and Art.  Those artists aren't decent guys like us -- they smoke dope and have nude models!  Hey, my kid could paint that!  Heartland culture never did embrace abstraction, thus skipping the large part of 20th-century art, and is even less accepting of performance art, conceptual art and other recent genres.  Do you remember the hysteria 20 years ago over Karen Finley's nude performances or Robert Mapplethorpe's photos?

There are a gazillion artists who grew up in heartland America, couldn't wait to move to the big city and put that white-bread world behind them, and became famous and successful after their escape.  Many of them used their native culture as grounds for irony or condemnation.  But I wonder whether that culture will produce any artists who will become part of the global High Art world by using the heartland culture in earnest -- or even any who aspire to do so.

What do you think?  Opinions from those of heartland heritage especially welcome.

Posted by Kathleen Loomis at 7:53 AM