I wrote yesterday how the backgrounds in my "Fault Lines" series matured from plain monochromes to expanses of two or more monochromes to, finally, several different values that started to become figures instead of just backgrounds.

Meanwhile, another change was occurring in my other series, "Crazed."  I had begun with solids, exploring various permutations of line and background.  In number 7 I started experimenting with print fabric as the fine pieced-in lines, and in number 8 and 16 I used commercial printed stripes as both line and background. 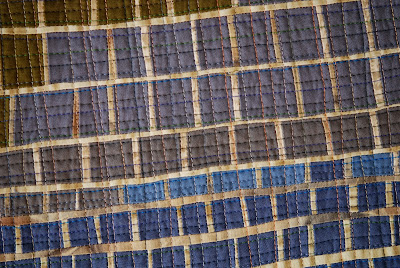 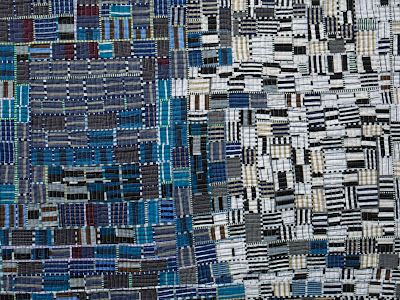 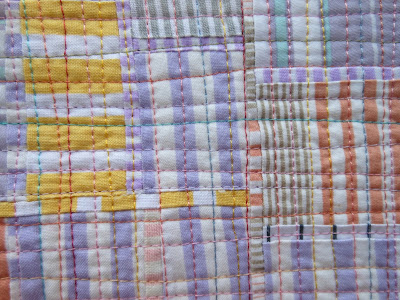 My local fiber and textile art group has a monthly grab bag in which we bring in the unused stuff from our studios and it gets taken home to become unused stuff in other people's studios.  To encourage people to use their finds, we have an annual grab bag challenge, in which you bring in something you have made with what you grabbed.  In January I showed Crazed 16 because the lavender and aqua stripe in the top right corner of the photo was a grab bag find.

I commented on how difficult it is to find commercial striped fabrics in the quilt stores these days -- polka dots are all the rage, but stripes seem passe.  The next day, a friend emailed me and said that she has used Fabric.com for many years and they had a lot of stripes.  So I went to the site and sure enough, was able to buy $150 worth of stripes that met my strict criteria (hard edge, not wobbly; solids, not watercolor; straight, not zigzag or wedge-shaped).  Now I had a big bag of new fabrics, alongside the ones I had already managed to collect, all crying out to be used.

But what to do with them?  Tell you tomorrow.