Back in school -- theory

Almost done with the semester, and I realize that throughout the course I have been wrestling with the question "what does this mean to me?"

First of all, who is me?  Although I am intrigued by the complexities and subtleties of theory, and enjoy reading art criticism, my primary self-identification is as a working artist, a maker.  And I have not yet seen much overlap between the theory and the practice of art.

In the history of high art, there have been plenty of theory-driven movements, many with their own manifestos, clubhouses and secret handshakes.  More recently, since the definition of art has broadened, there are identifiable groupings of certain practices and approaches -- conceptual art, performance art, earth art.  But I wonder how many of the artists whose work can be validly described by a certain theory actually woke up in the morning and said "I need to make something post-structural."   I suspect the inspiration came from some other thought process, and the theory was put on after the fact by outside obervers.

Even within the famously labeled movements such as Abstract Expressionism or Minimalism, many of the alleged participants have resisted the label.  And once you drop down the food chain, to the everyday artists whose work is not found in MOMA or written up in Artforum, I suspect that theory almost disappears.

I suppose there are everyday artists who choose their formats, mediums, subjects and viewpoints from a starting point of theory.  I could envision, for instance, that committed Marxists or feminists might choose to act out their political imperatives through art rather than through community organization, writing, academic scholarship or seeking elective office.  I know that in some repressive regimes, art (visual or literary) is one of the few vehicles available to express opposition and individuality. 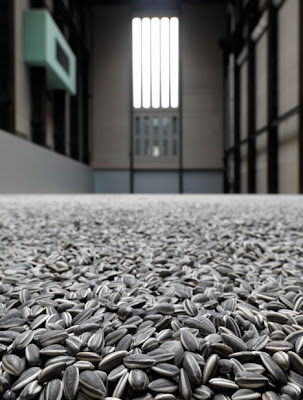 But I suspect these overtly political artists are vastly outnumbered by artists who determine their work from other starting points.  Some may be attracted to art because of an early-discovered facility in drawing, or the inspiration of a favorite teacher or mentor.  Some may come to it as a hobby and only later become more serious about it.  Some may come to it as a job, such as illustration, advertising or fashion design, and only later decide to practice it without benefit of clients.

As I think through the roster of working artists whom I know personally, which must number at least a hundred, I can't think of any who start with theory.  Many of them not only refuse to ground their work in theory but resist assigning any meaning to it.  If pressed, they might say "I make it because I want to," or "because I have to," or "because I can make whatever I want," or "because I like the way it looks."  Many artists who strive to sell their work will say "I want to make art that's beautiful" or "that people like" or "that people will buy."

And I won't say they're wrong.  In fact, I have a hard time thinking how a working knowledge of theory makes a better artist.  I have been asking myself as I read Barthes and Baudrillard and the other intellectuals whether anything I've learned has anything to do with people who make art, or whether theory is solely the province of people who talk about art.

So far I have come up with two possible trains of thought that might take me from the station of theory and let me off in my studio.

The first is that by learning about various theories I might come up with ideas that could influence my own art.

The second is that I need to carefully examine the messages that I am sending in my art.  Perhaps there aren't many people out there who want to receive them, or who are equipped to decode them, but on the off-chance there is somebody, I want to make sure that person will get the right idea.

I'm still skeptical about the role of theory in my life as a working artist, or the lives of my everyday artist friends.  But I'm thinking hard.


What do you think?  Does art theory enter into your work?


Posted by Kathleen Loomis at 6:39 AM