I'm almost embarrassed to tell you what I worked on earlier this week.  It's so far removed from what I think I should be concentrating on, like taking a three-decade step to the past, when I used to make cute little crafty projects all the time.  But it is cute.

Last month I wrote about "craftivism," the concept of people using craft to effect social change.  After talking about it with a group of artist friends, we resolved to think more about it and perhaps come up with an idea of our own.  Instead of coming up with my own cause, I hitchhiked onto a project that a fiber art friend of mine may be doing.

It has to do with Haiti, specifically the mountains of old clothes that were donated following the earthquake two years ago.  Experts in disaster relief tell you that donating clothing is a really bad idea. For one thing, it takes a while to get to the affected area, and the cost of distribution is relatively high.  A better approach would be to send money, so that the charity or relief organization could buy clothes on site.  That way they could buy exactly what people need and want (not your ratty old I'm-with-Stupid T-shirts) and support rather than undercut the local economy.

But many people ignored this advice and sent the old T-shirts.  Much of the donated stuff was unusable, and today it sits, further deteriorating and useless.  My friend may get the opportunity to visit Haiti, case out the situation and suggest ways that the garments or materials can be repurposed.  I'll let you know how that works out, but meanwhile I got to thinking about the ratty old garments hanging around my very own home, and wondering how I could transform them into something useful.

I started with a pair of my husband's old khaki pants.  The normal progression with his pants is that they start out nice and new, but eventually start getting worn around the bottoms of the cuffs.  I neatly turn up the hems a half-inch or so to conceal the wear.

Months more pass, and the cuffs start getting worn again on the new turn line.  Meanwhile the knees are starting to get threadbare and torn.  At this point I mend the knees and zigzag the frayed edges of the cuffs, and the pants officially become work pants, suitable for kneeling in the garden.  Then the knees wear through again, and I mend them again.  Finally I have to admit that it's time to pull the plug.

That happened with a pair of pants last week, so I decided to cut them apart for an art project.  Here's what I made: 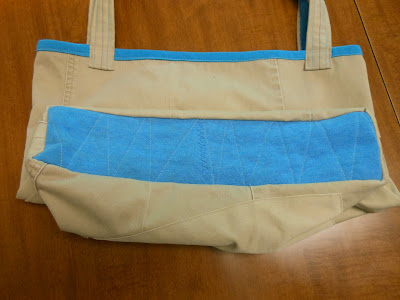 two rectangles cut from the legs, below the threadbare knee patches, for the body of a tote bag, and an old sweatshirt to line the bottom (I layered the bottom panel with pieces from the pants legs for extra strength) 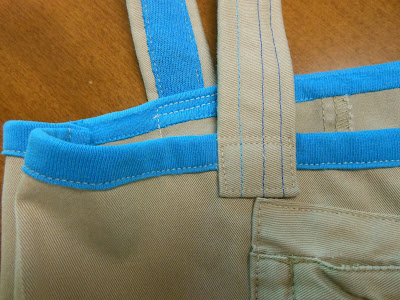 the hem of an old T-shirt to bind the top, and strips from the sweatshirt to finish the inside of the straps 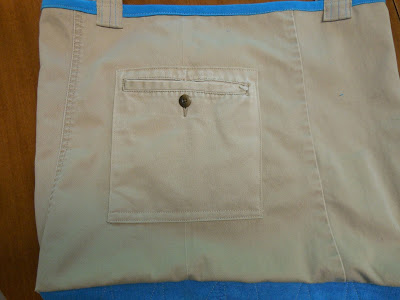 a pocket on the outside of the bag, closable with the preexisting button 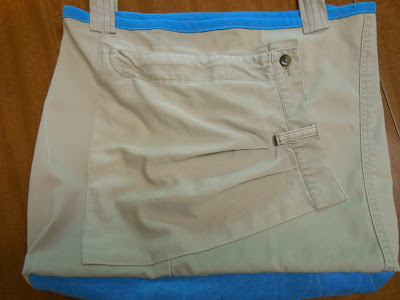 and best of all, a big pouchy pocket on the other side, made from the fly and waistband; it opens wide to accept fat things. 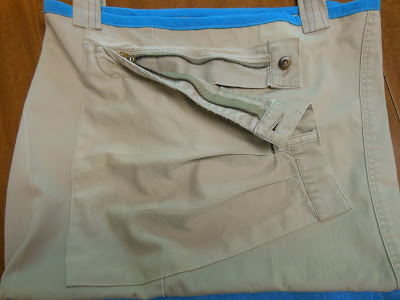 I would not recommend this product to the people in Haiti; it took me all day to make the bag and this is probably not a good use of resources.  But others in the group suggested two variations on the theme.

The first idea, appropriate to Haiti, would be to turn old pants into bags in a simpler, easier format.  For instance, perhaps you could just cut off the pants leg, slice it again through the knee to make two tubes, then sew one end shut and add handles to make simple bags.  Not designer wear, but perhaps people could use them to carry things.  Or the pants-leg tubes could be stuffed with some of those ratty T-shirts to make pillows.

The second idea, appropriate to the US, would be to collect old pants from celebrities, make elaborate bags like mine, and auction them off.  How much might somebody pay for a bag featuring the fly from Johnny Depp's pants?

I don't plan to use either idea in the future, so feel free to adopt them if you have a good cause.  I do plan to use my pants bag, frayed edges and all.

Update:  I'm linking this post to Off the Wall Friday -- check out what other fiber artists have been up to this week.


Posted by Kathleen Loomis at 5:34 AM