I've been putting the final touches on my book manuscript for the last couple of weeks, which mostly meant taking photos to document all the technical instructions on quiltmaking.  One of the big parts of that task involved layering, quilting, blocking, trimming and binding a quilt, documenting every step of the way in photos.  So I made a quilt and took pictures of everything I did with it.

I'm usually pretty good about downloading my photos to the computer every day or so, and I had hundreds in this series, making multiple shots of everything I did to be sure I had something in good focus and without any stray threads where they shouldn't be.  They piled up in my book folder and I dutifully checked off everything I needed to document.

Then, for some reason, I wiped the card clean.  I'm usually pretty bad about doing this; my card will hold thousands of images and often I let thousands of them pile up, even after I've downloaded and used them.  But this time I was feeling conscientious.

So you guessed it.  I missed downloading a few photos in the middle of the run.  I don't know how -- maybe I thought I was selecting everything and didn't have the page scrolled down all the way, or maybe I thought I had already downloaded those the day before.  But when it was time to plug the photos of mitering the binding into the book draft, there were no such photos to be found on the computer.  Or on the card.

By this time, of course, the quilt had been finished.  So I had to make a new one, miter the binding and photograph it. 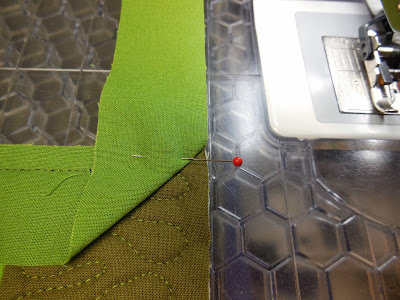 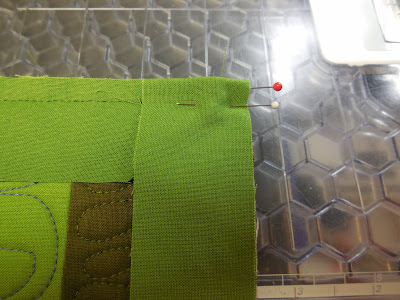 Well, you don't think I made a whole quilt, did you?  Although it certainly looks real.

Actually I found some bits and pieces and sewed only as much as I needed. 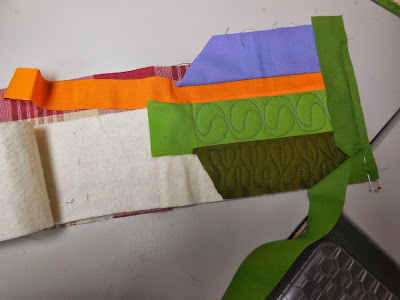 Feeling stupid all the way.