One of my daily art projects for 2011 wasn't really daily, more like weekly.  I was making bundles or packages of stuff that I found lying around, either indoors or out, at least one every week.  Some weeks I'd make several if opportunity presented itself.

One week in particular I made a bunch of bundles, since we were at the beach and not doing much except walking in the sand and picking up shells anyway.  There were six, and I carefully put them into plastic bags and cushioned them so they wouldn't get broken or unbundled on the way home.  In a masterpiece of bad vacation planning, we had only one day between getting home from the beach and setting out for a cruise, so between unpacking the suitcases, doing laundry and repacking, some things never did get properly put away.

You guessed it immediately, but I didn't figure it out until eight months later when I was trying to document all the bundles I'd made during the year.  I realized with a terrible sinking sensation that the ones from the beach had never been unpacked and put in the big bag with all the other ones.  I searched around in what I thought were obvious places but never could find them.

At least I had the photos, I told myself, trying to get used to the concept of having lost some of my work for the year.  Heck, what's the point of a daily or weekly art project if you can't assemble the whole thing when it's over?

The other night I was looking for some crocheting to do while we watched TV.  It has just recently gotten cool enough that I want to have an afghan over my lap in the evening.  So I found a bag with a project already begun and worked on it during the movie.  As I was packing up afterwards I noticed the bag was kind of heavy and rooted around to see what was in the bottom besides three more skeins of yarn. 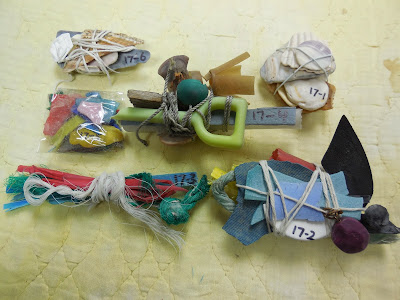 Of course it was the bundles from the beach; apparently I had taken that afghan along on the trip and not looked at it since.  I am so happy, having almost but not quite resigned myself to them being lost forever (or should I say misplaced forever, if there's a difference).