From "Bright Earth: Art and the Invention of Color," by Philip Ball (which I wrote about last week):

But will anyone still be painting in ten or twenty years' time?  It is not a fashionable art.  Painters have become a relative novelty among the candidates for the much hyped Turner Prize, awarded annually in Britain for young artists.  The names of no new young painters are on everyone's lips (at least, not for longer than a few weeks).  We are still blessed with our Fran Auerbachs, our Howard Hodgkins, our Lucian Freuds, but do we have our Klees, our Goyas, our Raphaels?

...The truth is that we had more than enough greatness in twentieth-century painting, and what does it matter that the final years lost their sparkle?  Who now complains, for example, about the fallow time at the end of the seventeenth century when Vermeer, Velazquez, Rubens, and Rembrandt had passed on and no one had stepped up to take their place?

And so where will the next great colorists take us, and what will be on their palette?  Perhaps conventional pigmentation will indeed take second place as the metallic flakes and fluorescent splashes of Stella and the Pop Artists become supplemented with new possibilities: pearlescent colors... or pigments that change hue as we change our viewing angle.  Both are manufactured as automobile pigments.  Perhaps artists will use liquid crystals that change color with temperature or that offer an iridescent rainbow all at once. 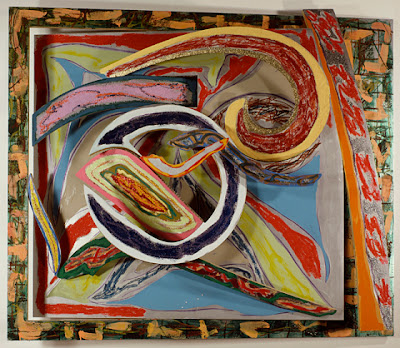 Well, maybe.  Certainly, all these media will be used -- because that is the way of art, to find ways to take advantage of what technology offers.  That, I hope, is the one central message of this book: technology opens new doors for artists.  And of course technologists cannot then prescribe which portals the artists will go through or what they will do on the other side.  "The painter of the future," said van Gogh, "is a colorist such as has never been seen before."  I do hope so.  The delicious irony is that paint manufacturers, color theorists, and colormakers, practically inclined craftspeople, have traditionally been conventionally minded folk, offering up gleaming new tools into the hands of visionaries who go and do something crazy with them, break the mold, create a revolution.  Long may it last.
Posted by Kathleen Loomis at 6:32 AM