I've written about my new volunteer gig, helping to catalog the "International Honor Quilt" collection of panels that were made to accompany Judy Chicago's Dinner Party installation.  What I'm finding as I go through the boxes is fascinating, so I'll share some of it with you as I work.

My favorite piece in the first 200 panels I've catalogued is this one, by Ana Lupas: 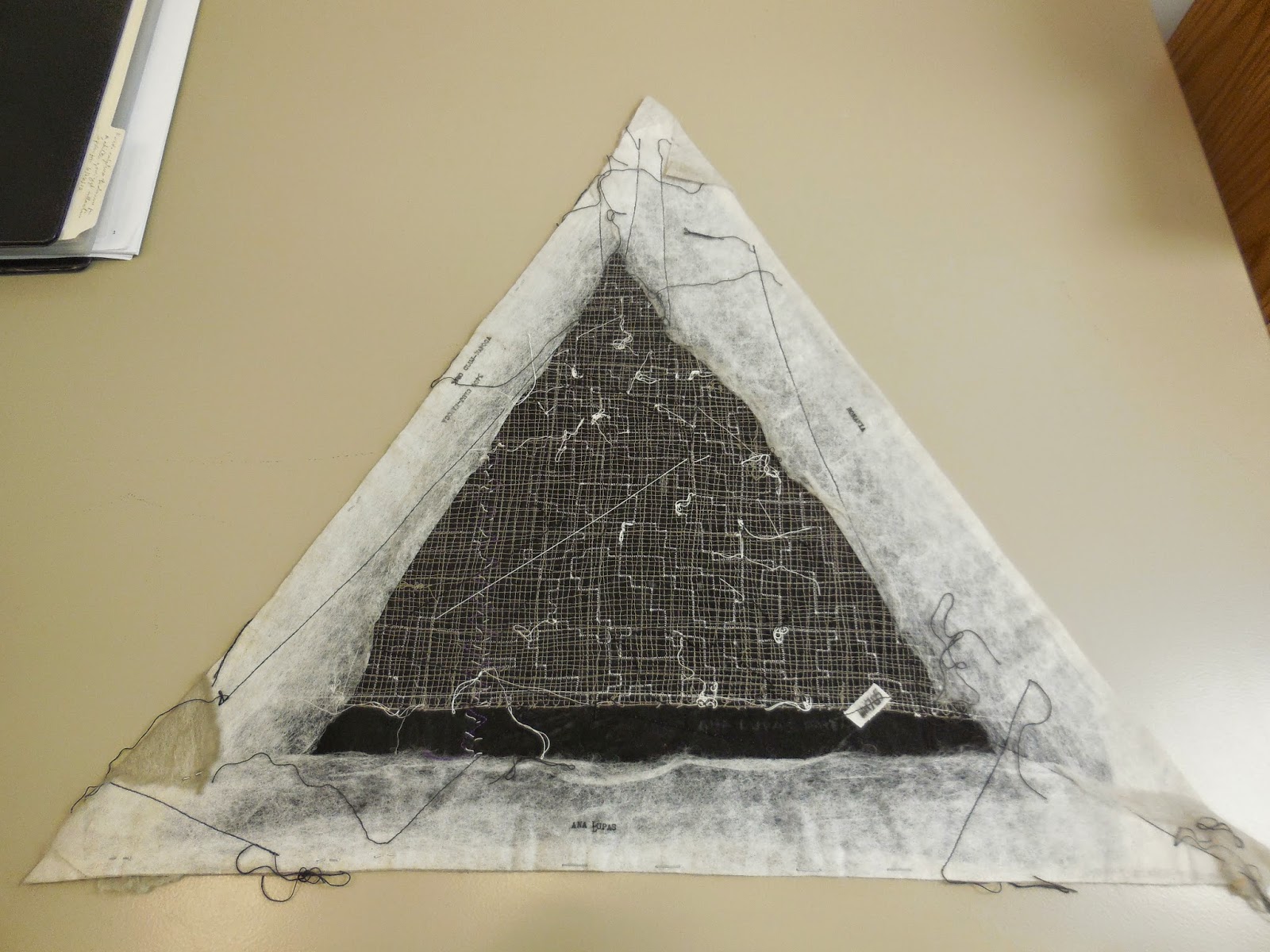 Yes, at first glance it looks pretty awful, a mess of raggedy interfacing and loose thread ends.  But as you look more closely, you notice the intricate machine-stitched gridwork in the center: 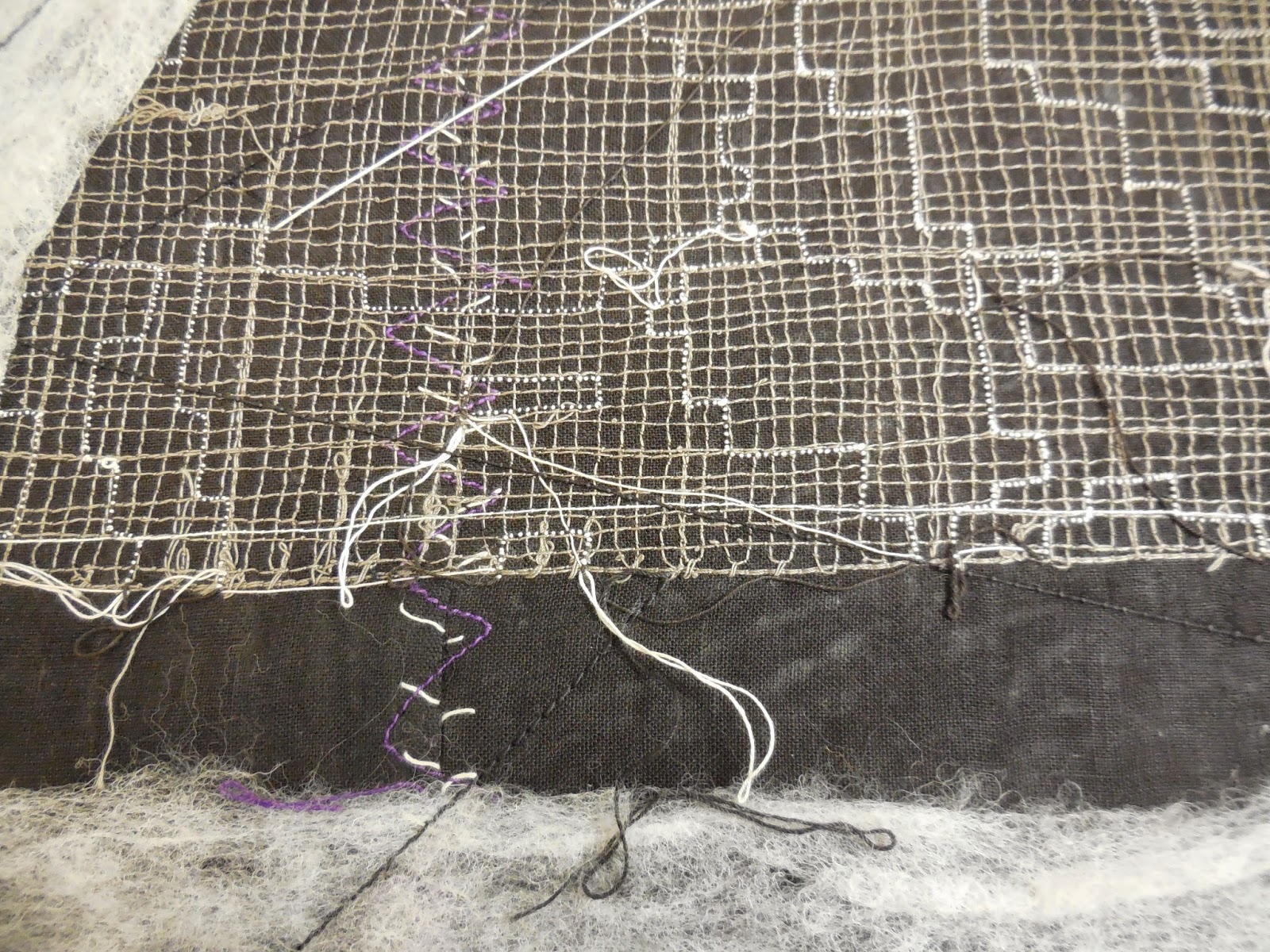 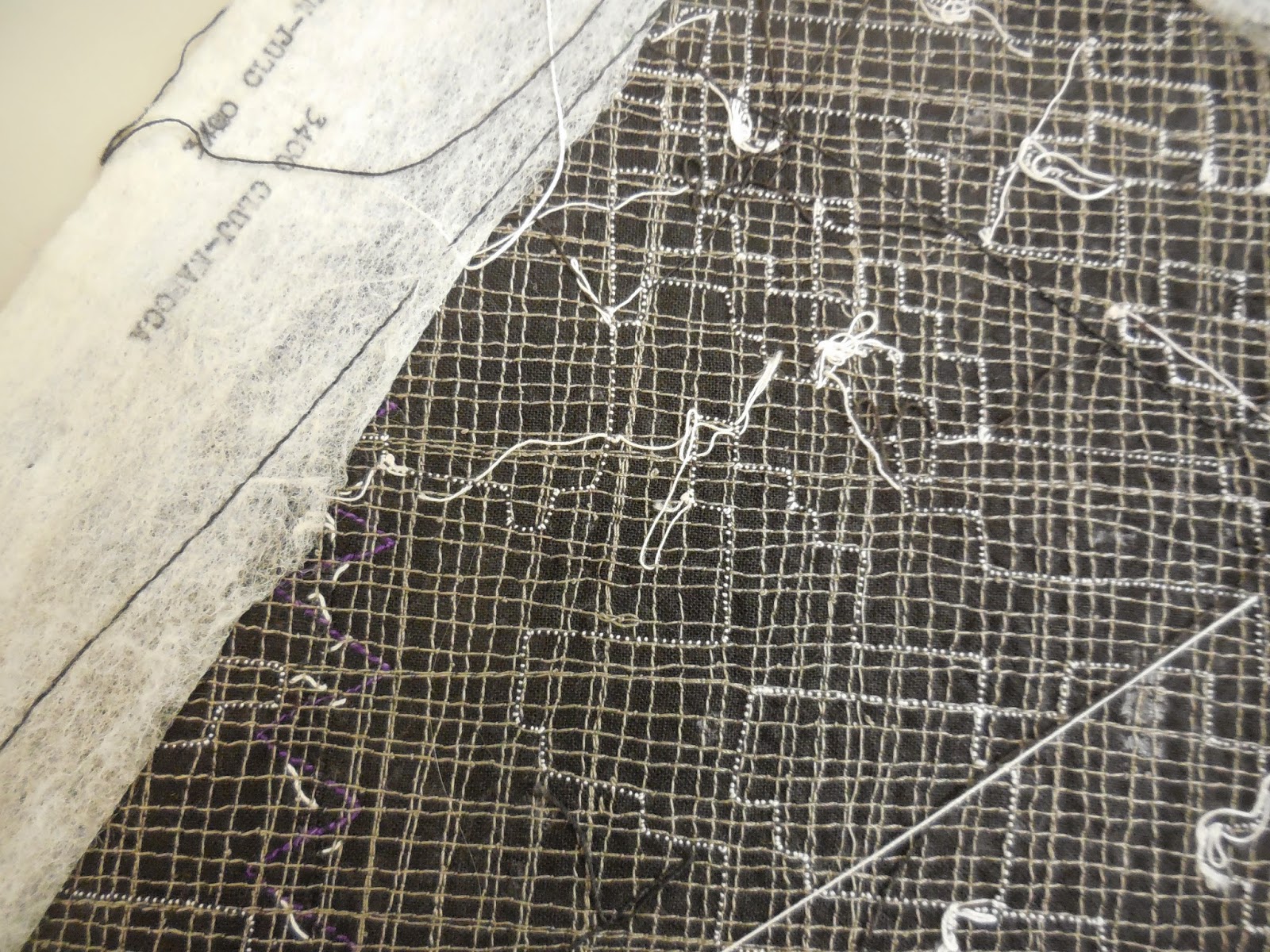 Why did this piece call out to me so loudly?  I love grids, and I love dense machine stitching, and I love old-fashioned typewriters like the one used to type Lupas' name and address on the interfacing.  But what I really admire is the supreme confidence of an artist who can put such humble materials together -- the edges are secured with staples! -- and make them stand up straight and proud.

The panel stood out from the others -- not pretty, not earnest, not awkward or amateurish, despite its seemingly haphazard construction.  It's the only one I've seen so far that strikes me as art rather than as decoration. 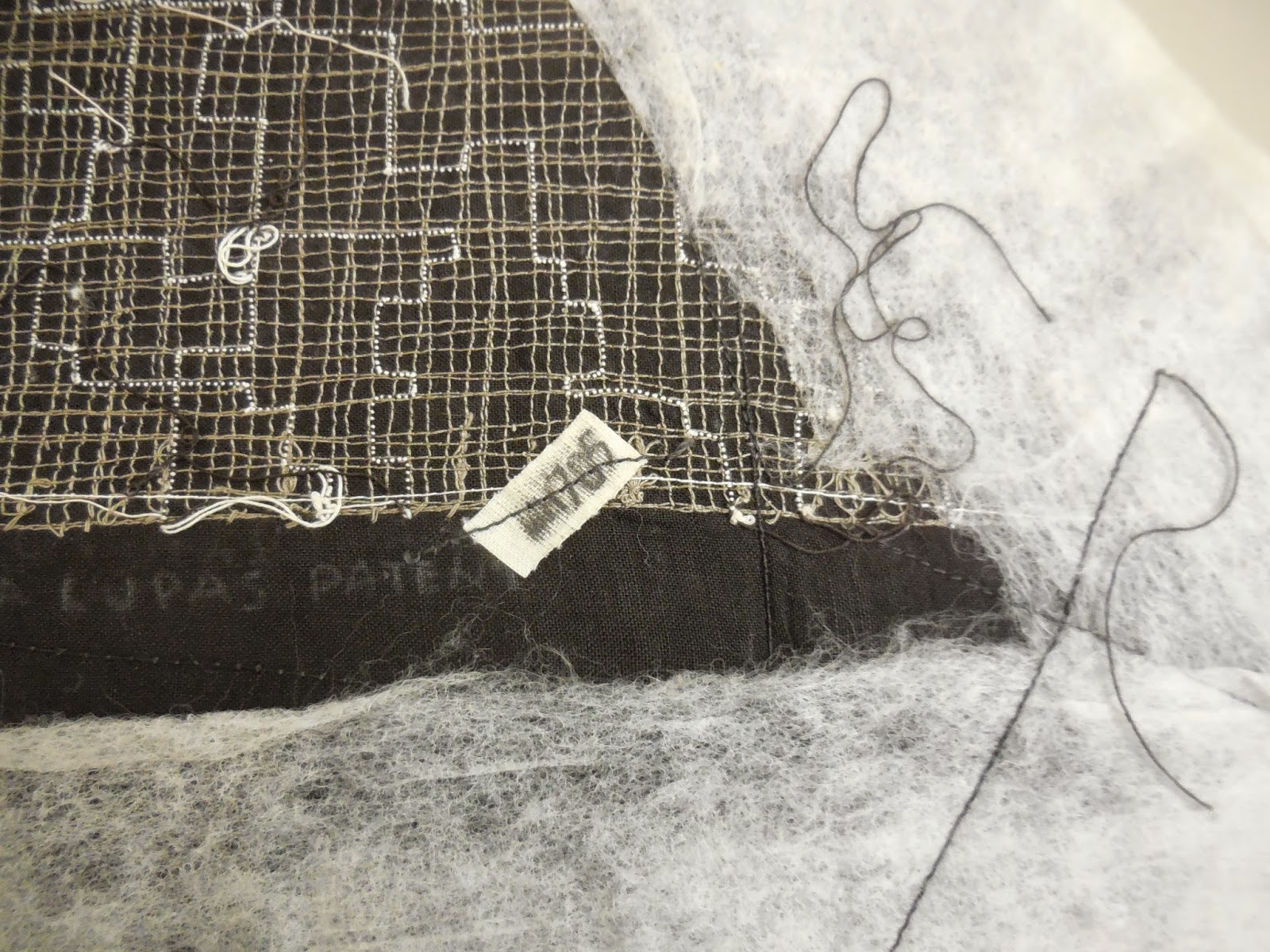 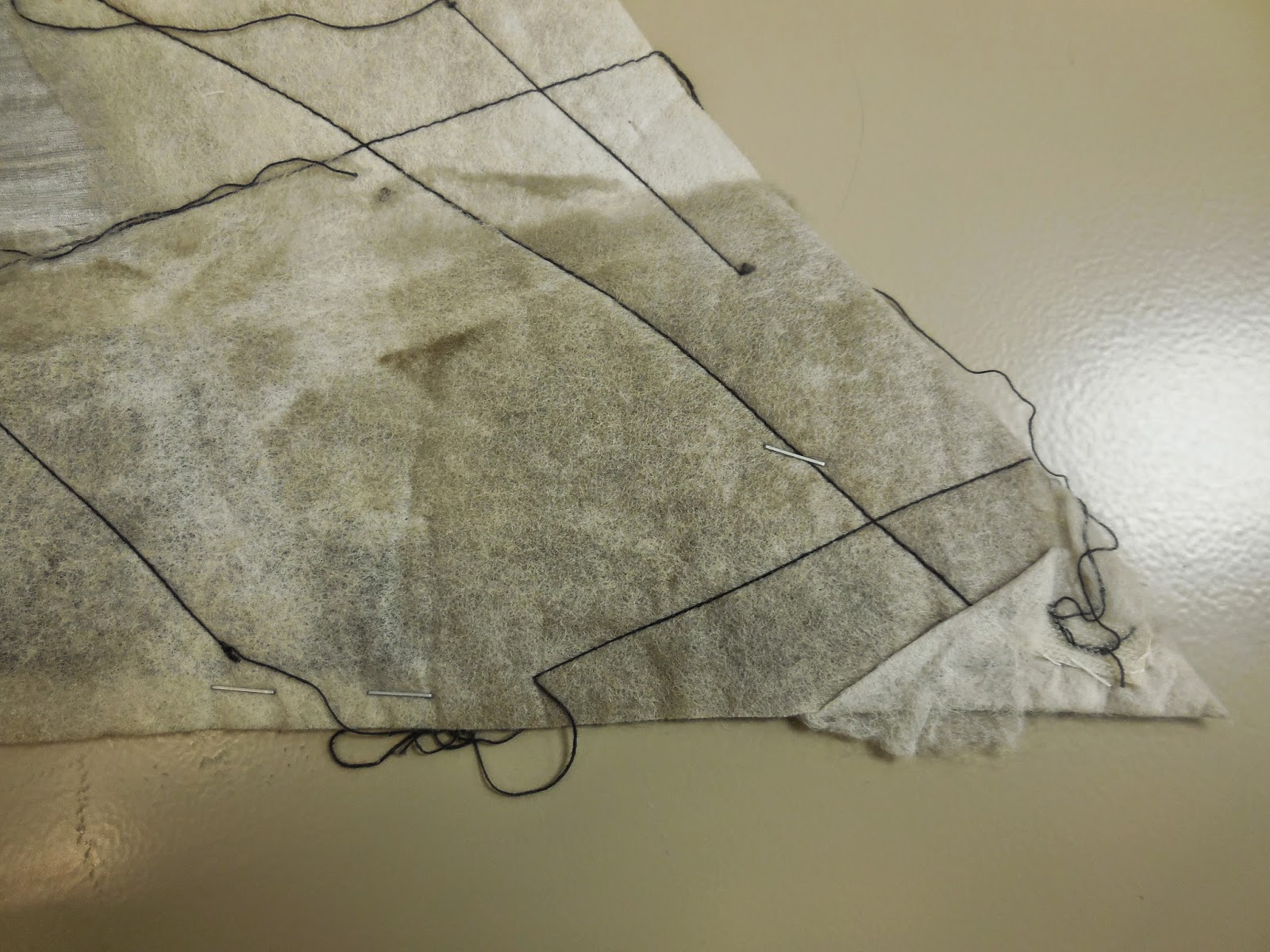 I had never heard of Ana Lupas, but some research reveals her to be 75 years old, living in Cluj, Romania, where she was born.  She started her art career as a tapestry weaver and was exhibited in all the major shows, including several times at the the Lodz Triennial, where she won Gold and Silver medals in 1979.

She expanded her work to installations and happenings, especially outdoors where she was among the earliest Land Art practitioners and strongly influenced many of her fellow artists in Eastern Europe.  She would enlist people from villages to construct wreaths, towers and other forms from straw, then leave them outside for years to weather and disintegrate.  Predating Christo's Running Fence, she had 100 women help her cover an entire hill with clotheslines of wet linens. 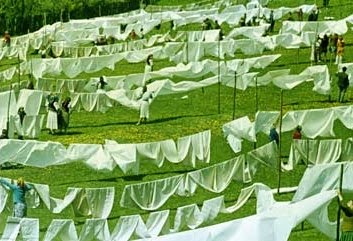 I was unable to find more information about Lupas and her recent work, even by painfully reading Google translations of art criticism from the Hungarian. Likewise, I found an artist statement that somebody else had translated into English, but it left most of its meaning behind.  She talks about art having "to contribute, to shape, and to give new dimensions to the social existential universe," whatever that means.  She has no website, and I could find no images of her early tapestry work, predating the internet.

I'm afraid she will remain a mystery to me; her work calls out to me across the years but leaves me hungry for more.


This is cross-posted to Ragged Cloth Cafe, a blog about art.
Posted by Kathleen Loomis at 5:23 AM