Recently somebody wrote to the Quiltart list asking us to look at her blog and give her some comments about her work.  She wrote:  "I have no friends (yet) in this community and no process for feedback locally. I also cannot afford to travel to shows and events. So it’s just me and my sewing room. I am desperately trying to find my 'voice' in fiber art. I would really appreciate those w/experience to help me with ANYTHING."

This struck a chord with me; twelve or thirteen years ago that was pretty much me.  So I looked at the work on her blog and noticed that like me, twelve years ago, she had made a bunch of pleasant quilts that were not related to one another in any way.  I wrote her back and suggested that she think of working in a series, building on work she had already done and progressing deliberately to repeat things that went well and avoid things that didn't.  I said that I had written a lot about this subject in my blog and maybe she would find those posts helpful.

So of course I had to go back and review exactly what I had said in the past, hoping that they might actually be helpful.  In one post I discussed when you should abandon a series, and promised that some day I would show you some series that I abandoned and tell you why.  Readers, that day has come.  Return with me to some of my great failures.

Several years ago I had a solo show in which I made a quilt for every letter of the alphabet.  The Z quilt was particularly pleasing to me, because it was a big step forward in my courage to try non-traditional, non-nice technique.  Recalling my childhood sword-wielding hero Zorro, who was wont to slash his initial into miscreants' shirts, I slashed a Z into a piece of canvas before dyeing it.  By the time the fabric emerged from the washing machine, the edges of the slash had frayed beautifully.  I put blood-colored fabric beneath the slash and let it peek out a bit from under the quilting stitches. 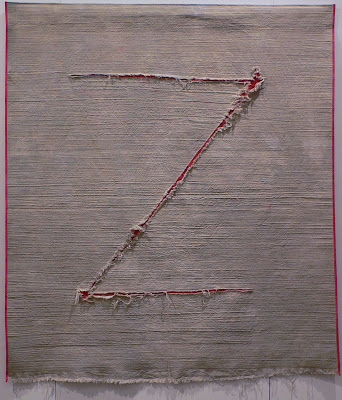 I liked the effect so much that I wanted to try it again.  The first time was a tiny reprise of the Z, using some canvas left over from my first experiments in fray/dyeing.  The next was a small quilt with blue lamé-type fabrics peeking out from the slash, plus a few beads for extra glitz.  The third time was a larger quilt with gold peeking out. 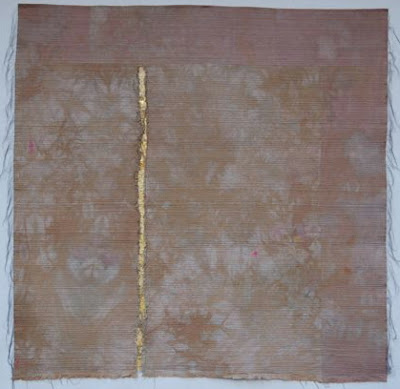 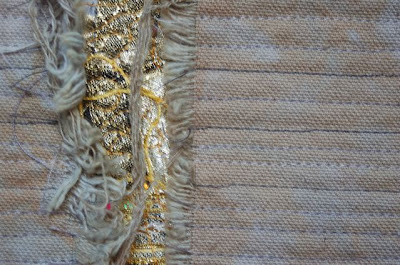 I liked all the quilts up close.  The frayed edges were nice, the quilting stitches had a good rhythm.  The contrast between the rough, drab canvas top layer and the shiny, glam inside worked.  But step back a ways and the quilts died.  The composition wasn't strong enough to carry the day.  I didn't realize at the time, but the simpler the composition, the more important it is to get it right, and these quilts just didn't hack it.

I had already slashed and dyed another piece of fabric for a fourth quilt in the series, but I decided to quit while I was behind.  There wasn't enough promise in the three pieces I had made to keep me going.  In retrospect I wonder if I made the right decision; there was something of value there and perhaps I could have made it work had I kept with it.

In retrospect, I also realize that the series sputtered to a close because it didn't have enough meaning to me.  Yes, the "can't tell a book by its cover" theme is obvious.  But that theme doesn't particularly resonate with me; I haven't spent a lot of time contemplating hidden meanings, or trying to figure out people whose inner and outer personalities are vastly different.  It was a message that I didn't want to devote a year of my life to sending.

Bottom line: it might have worked visually, but not intellectually or emotionally.  Abandon ship.