I've seen a bunch of art and attended a bunch of art activities over the last several months that never managed to get written up for the blog.  So in anticipation of a trip, during which I probably won't be able to post new things, I'm trying to catch up with some of the pending subjects.  My apologies that some of the shows have already closed and the activities are long past.

I'll start off with a show by Laurie Wohl, a New York fiber artist who has concentrated on liturgical and religious-themed work.  Her show at the Patio Gallery in Louisville was a series based on Christian, Jewish and Muslim poetry and spiritual texts.  She wrote: "For this project, I emphasize particularly the common themes and striking parallels between Arabic and Hebrew texts, similarly rich in a poetry of spiritual love, an extensive poetry of exile, a poetry of nostalgia for Andalusia, and poetry speaking of enemies and reconciliation."

It's a daring subject in this era of widespread fear of radical Islam, to seek similarities between that religion and Christianity and Judaism.  In fact, viewers might have shared the tiniest start to read Wohl's categorization as "the Abrahamic religions" -- we Judeo-Christians don't usually think of Islam as our sibling.

Wohl's works in this series make extensive use of calligraphy, mostly Hebrew and Arabic scripts, and also repeat the imagery of a veil, through her signature "unweaving" technique.  Working with a heavy canvas, she slices either the warp or weft threads around the edge of a shape, then unpicks the weave to leave the other strands loose.  Because the weaving process puts a lot of crimp into the strands, when they're set free over a long distance they're significantly longer than the woven part of the canvas, so they droop and/or bulge. 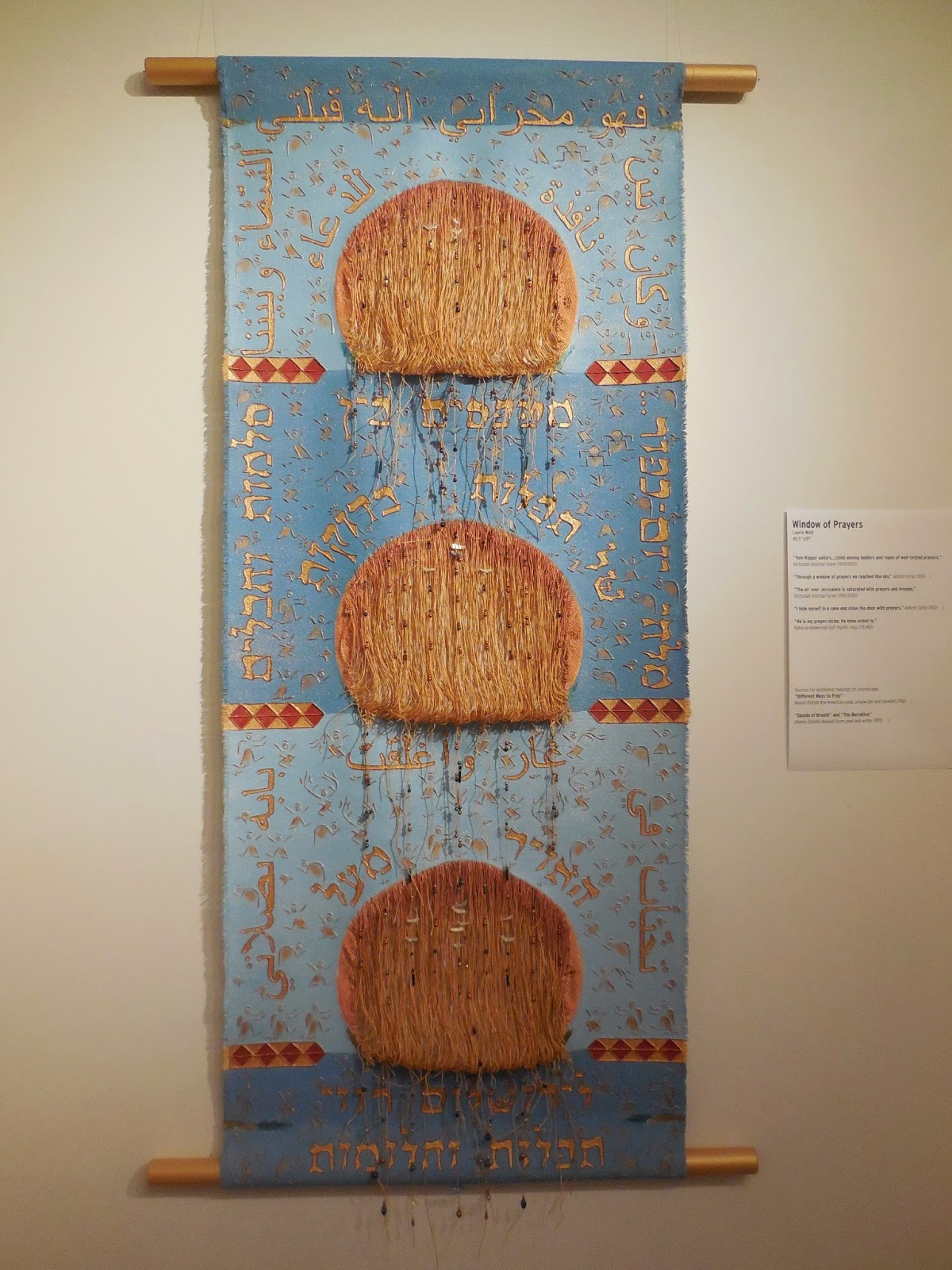 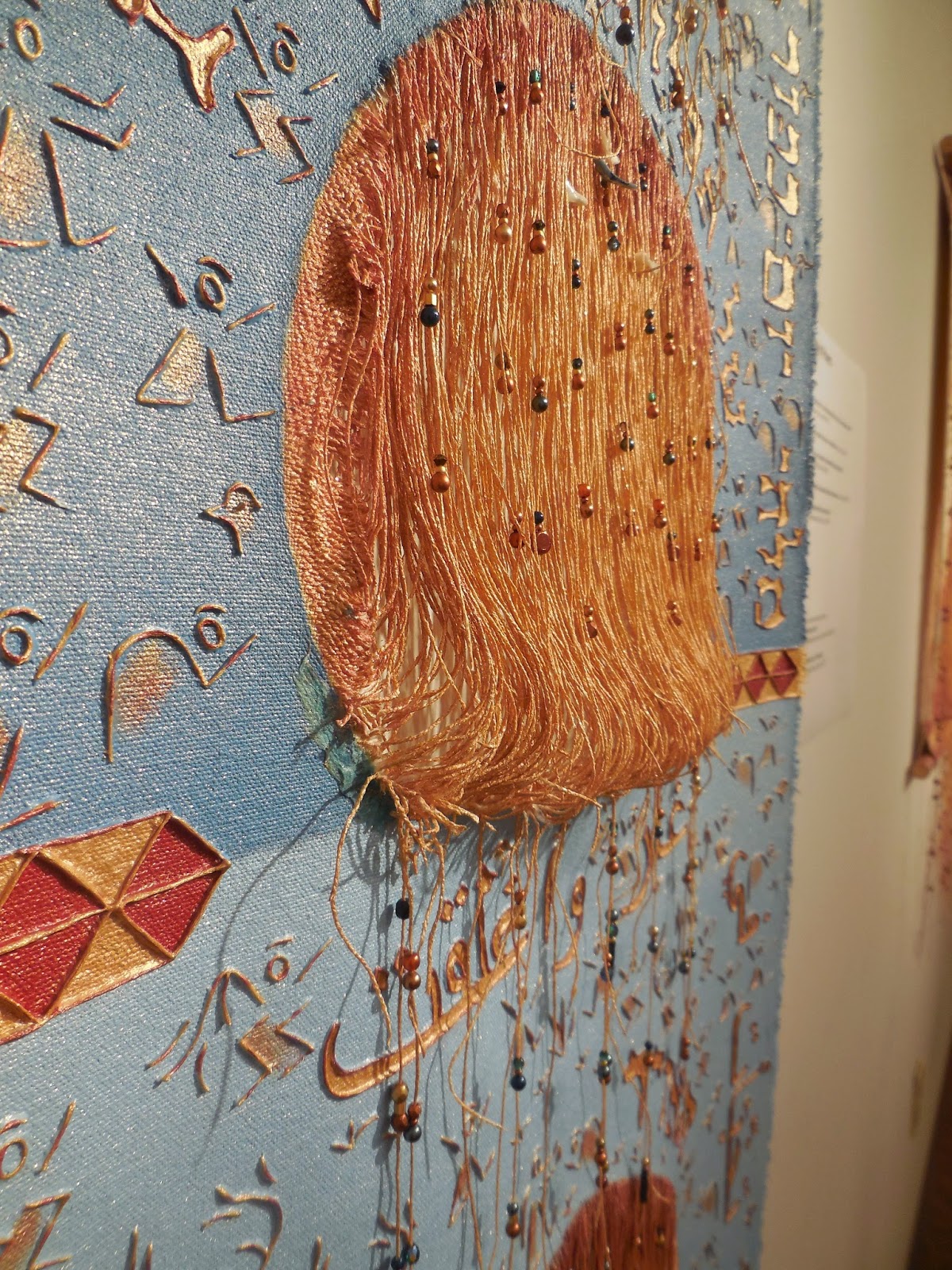 I missed the gallery talk so I didn't learn how Wohl achieves the sharp raised edges on her letters and shapes. 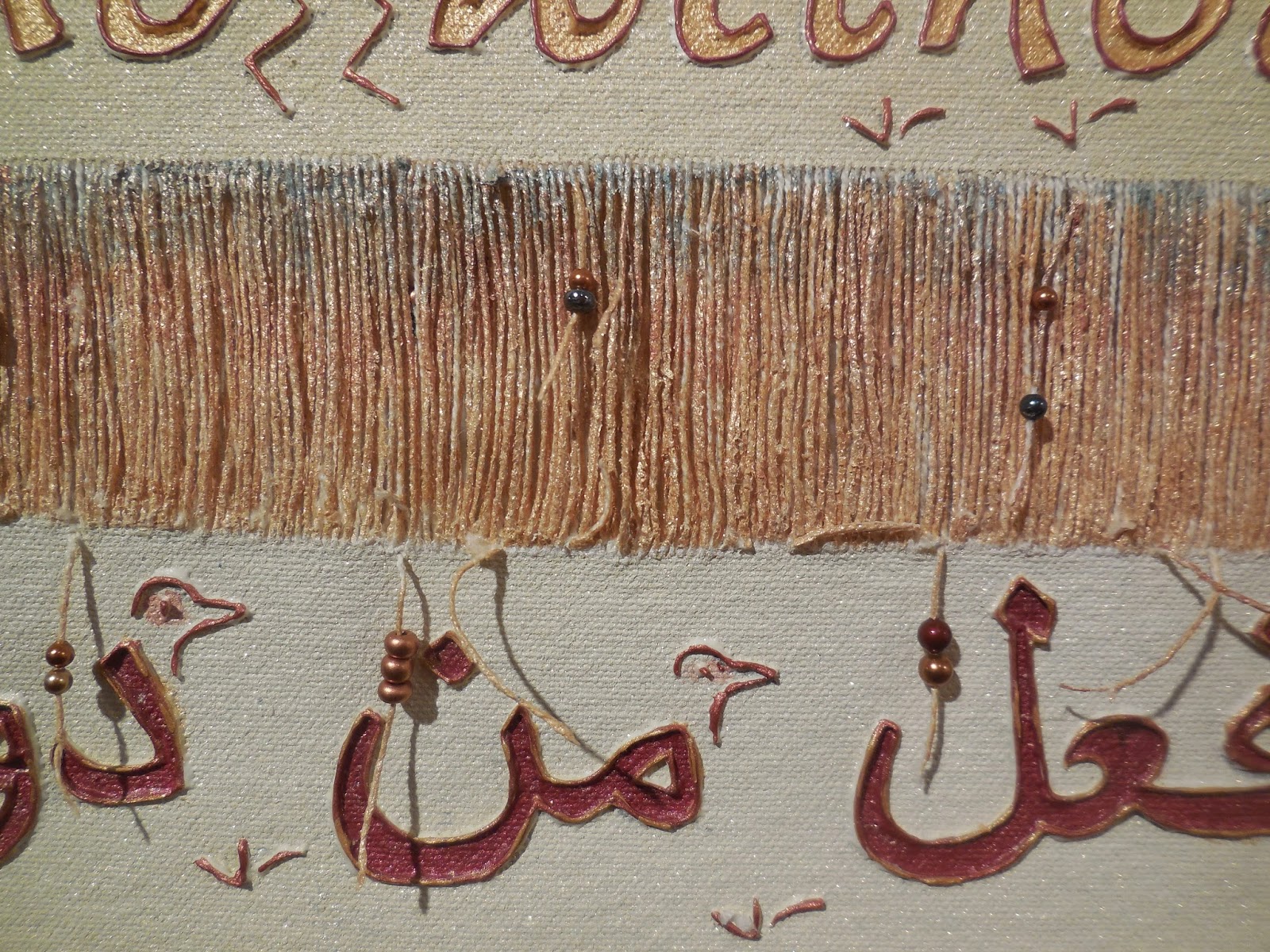 I could tell that she painted the "unwoven" strands of her canvases and often strung beads on them.  Sometimes she sliced the free strands at the top of the shape so they would hang down below the unwoven area. 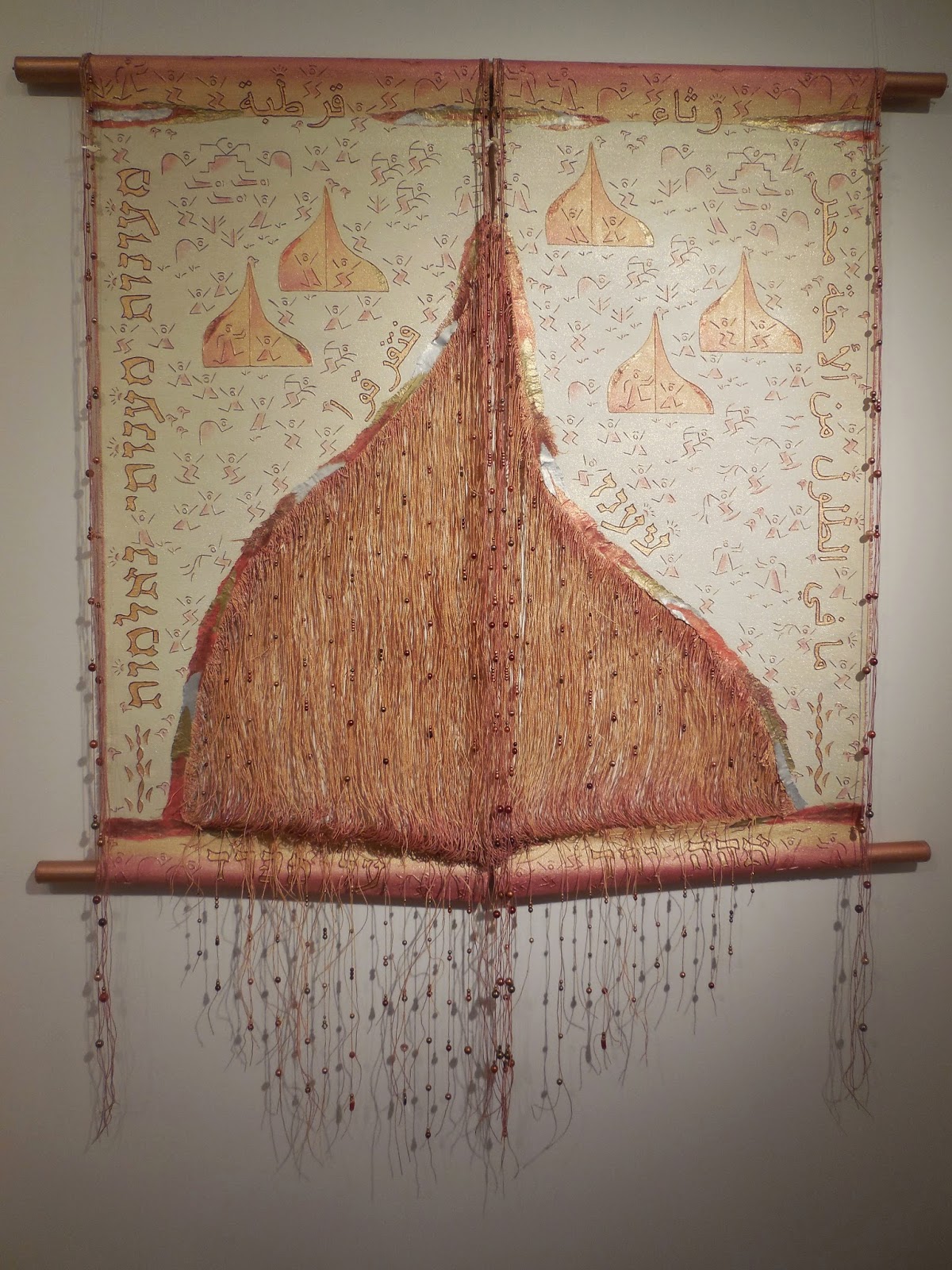 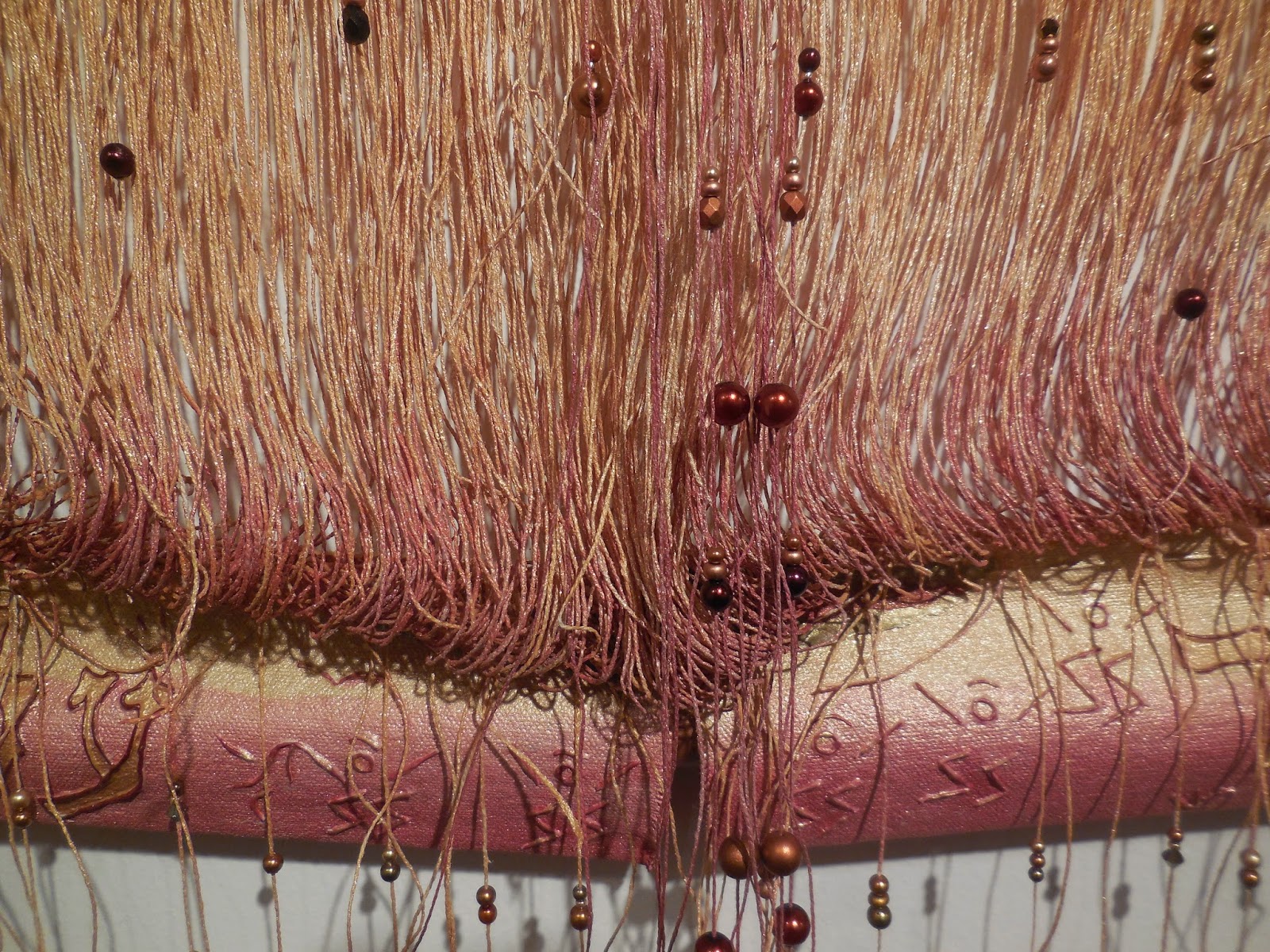 (Note how the rods at the bottom droop slightly at the center where more of the weave has been removed.)

Usually she removes the horizontal threads and leaves the vertical, but not always. 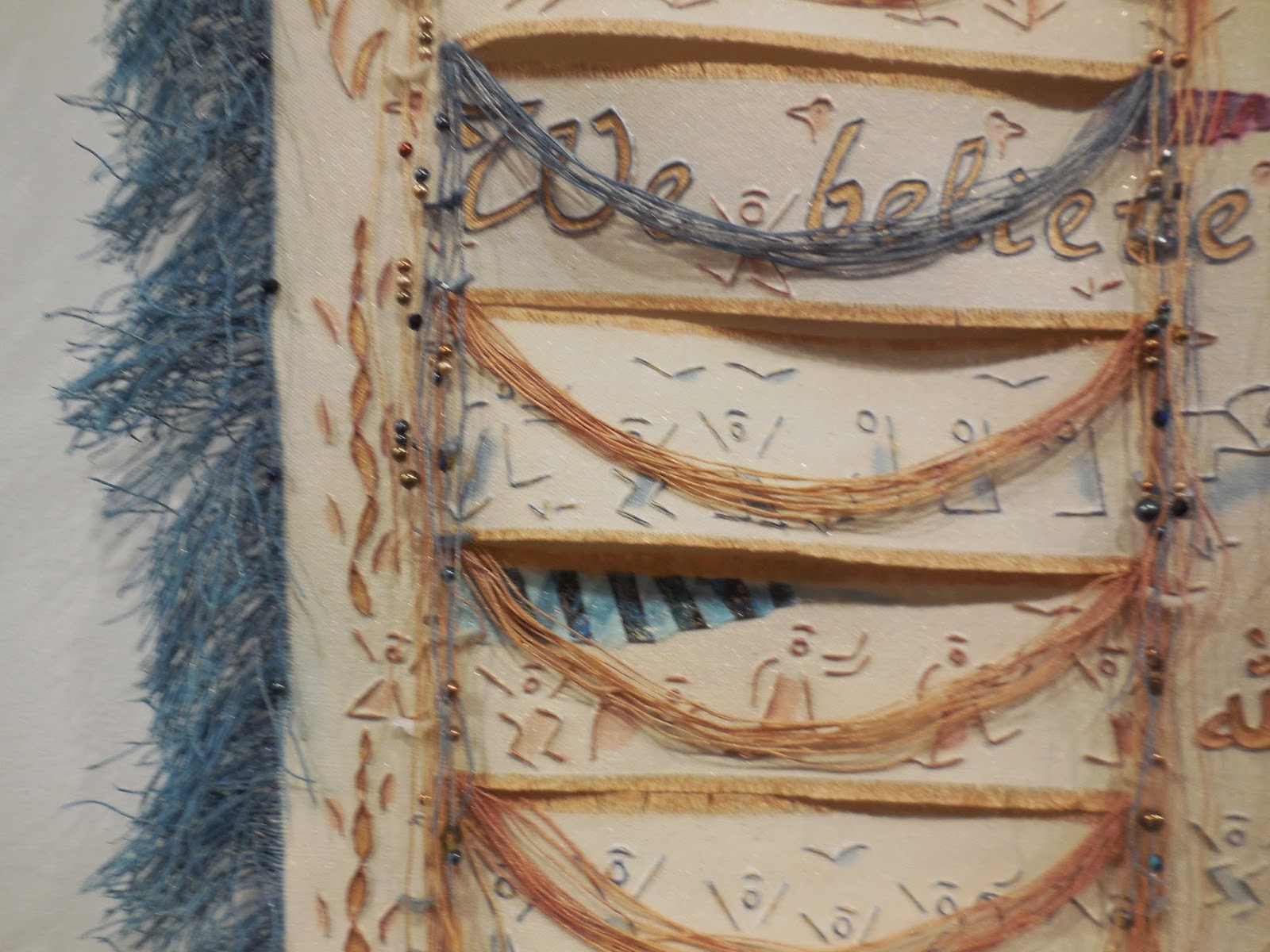 I'm always intrigued by art that uses text or letterforms, and though I read neither Arabic nor Hebrew, I could tell that Wohl's calligraphy is exquisite.  The works have a solemn presence as well as a bright and lively sparkle.  The show was well worth a visit.


----
I've cross-posted this to Ragged Cloth Cafe, a blog about art and textile art.  Drop by and visit us there some time!