A week on retreat -- and not much to show for it


I got home yesterday from a week at our twice-yearly retreat, just 25 miles down the road but so far away in mental distance.  It doesn't seem that I accomplished very much at all -- mainly I read through a huge pile of newspapers, cut out this many little clippings for my daily art and other found-poetry projects 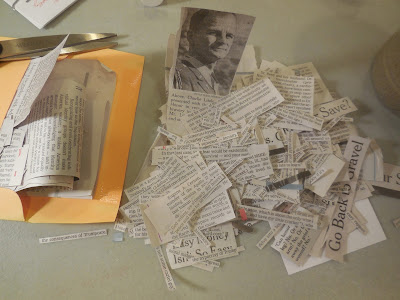 and put a foot-high stack of papers into the recycling bin. But yes, it takes three full days to accomplish that much, and I didn't even get the little clippings sorted and filed.  And I brought home another stack of papers that still haven't gotten read.

I did come across interesting things in the pile that I should have noticed months ago.  Here's one that made me crabby.

It's from an art review in the New York Times of a show by Nari Ward, a sculptor who immigrated to New York from Jamaica and who has worked extensively with themes of African culture coming to the new world.  The photo shows an installation of bricks covered with painted copper.


The reviewer comments, "African-American history is embedded everywhere. The colored patterns in the floor installation are derived from 19th-century African-American quilts....  The quilt patterns derive from African textiles."

Well, I beg to differ.  Perhaps the artist was inspired by a Bear Paw or Shoo-fly quilt made by an African-American -- those traditional quilt designs were no doubt popular among quiltmakers of all ethnicities -- but those patterns did not derive from African textiles.

It's just another example of people who don't know much about quilts being glib -- and wrong.  (And on that same note, the other day I saw an announcement about some woman giving a speech about quilts used as code on the Underground Railroad....)


Posted by Kathleen Loomis at 5:10 AM