In the olden days, of course, printers had to set all their type one letter at a time.  It took a while to do a book, because you wouldn't own enough type to set more than a couple of pages at a time (especially if the book was about St. Francis Xavier or explorers' expeditions or zebras -- think about it: a font of type included lots and lots of lower-case es but only a few xs and zs).  Even after the invention of the Linotype in 1884, which allowed printers to set a whole line of type in one chunk of metal, there was plenty of single-character type in use.

But the development of phototypesetting shortly after WW2 eventually made both the Linotype and the older single-character type obsolete.  Even the smallest printshop switched to photo type (often called "cold type") as soon as possible; it cost less and required way less tedious labor.  So in the 1970s and 80s the flea markets of America were flooded with old type, both wood and metal, as old-style printers got rid of their old-style type or went out of business.

My dad was a typographer and loved type in all its many forms, and had the prescience to realize that the old stuff was going to disappear.  He bought lots and lots of type, including some really huge letters that must have come from a printshop specializing in billboards.  He gave me these big wood characters in the early 70s and they have had a prominent place in all my living rooms ever since. 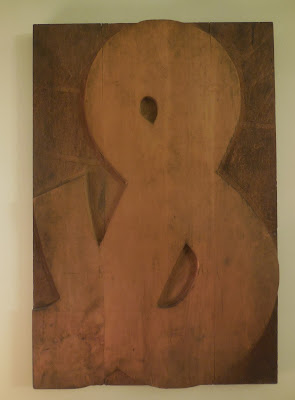 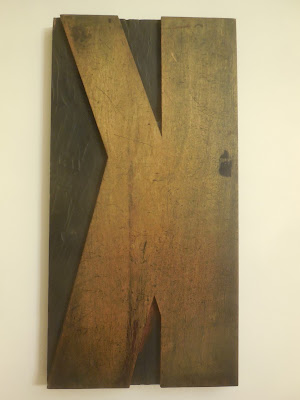 The wood is still smooth, with pretty sharp edges; you could print off it easily and probably get a good impression.  But it also has the fabulous patina of years and years of use.  The printing surfaces on both pieces are probably close to their original color, although you can tell that they have a lot of ink in their history.  But the recessed background areas, which weren't cleaned as carefully because they never touched the paper, are darker and stained, with their own non-shiny patina.

I own lots and lots of smaller wood type with similar characteristics, much of which I still use to print with.  But I'd give my left arm for more of these big guys.  I'm sure if I hunted on eBay or other specialty sites I could find some, but it would certainly cost 100 times what Dad paid for these.