Cleaning the studio -- a milestone

Now there is cleaning and there is Cleaning.  I recall without much fondness a week when I was helping my sister clean up her entire condo to put it on the market.  A couple of days into this task, the real estate agent called apologetically -- she knew we had agreed on next week to list it, but the perfect buyer had just walked in, and could she bring him over tomorrow?  OMG, what about the entire lower level, full of stuff?  We quick rented a storage locker, humped all the boxes and etceteras into the car, took three loads over that night, swept out the room, collapsed with Scotch.  The real estate agent couldn't believe it when she walked in the next morning -- what had happened to all the stuff????

That's Cleaning.  But that's not what I have been doing since Christmas.  I've been allowing myself rests and digressions because otherwise I would just burn the place down and myself in it in despair.  So every now and then I will stop, sit down and make more people out of the bits and pieces of fabric that don't easily go into one of the organized piles. 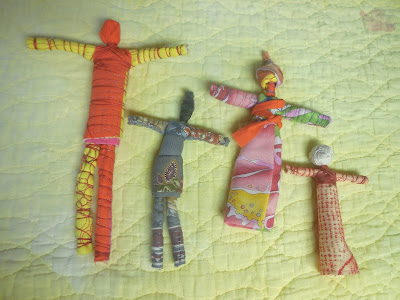 I have been giving my quilt fabrics away to a guild that makes charity quilts, and they say they're happy to get pre-cut strips and pieces, but I have been afraid that their tolerance for sorting through scrap bins may not be as high as my own.  So every now and then I'll stop, sit down and sort out a bunch of color-coordinated scraps to sew into rail fence blocks.  Mindless sewing, good therapy, uses up those scraps (but not fast enough). 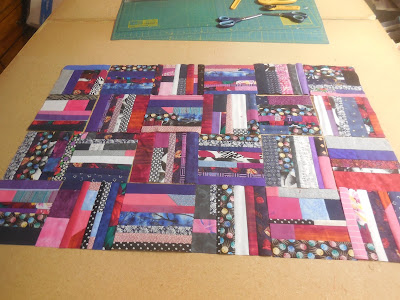 And every now and then I'll stop, sit down, and make tie-up cords, either by braiding strips of leftover fabrics or by folding and stitching wider strips into stronger tapes. 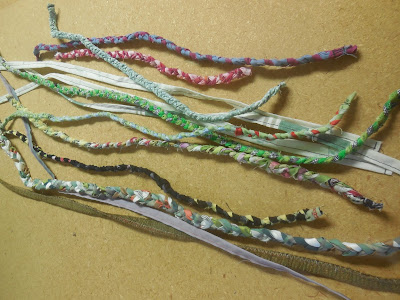 But yesterday I hit a milestone -- my entire 5 x 8' work table empty of stuff.  Usually half of the table is covered with an old mattress pad, which makes it an ironing surface.  It hasn't been free of stuff since July so I took the opportunity to put it in the wash.

A whole lot of the previously free-floating stuff has been divested, or sorted into boxes, many of them neatly filed on shelves.  Some of it still is free-floating, but at least not on the work table.  Still a lot of cleaning and sorting to go, but a third of the studio has visible floors, neatly organized shelves, empty horizontal surfaces.  This has not been fun, but it is nice to reacquaint myself with the top of my table. 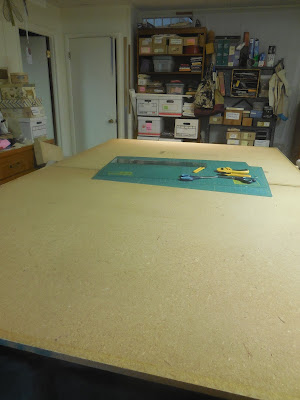