A few weeks ago I was unhappy to see a bunch of moth holes on my husband's favorite sweater vest, which he's had for decades.  Yes, it had pills on it, but it was still warm and comfy, 100 percent wool, and did I mention that it's his favorite? 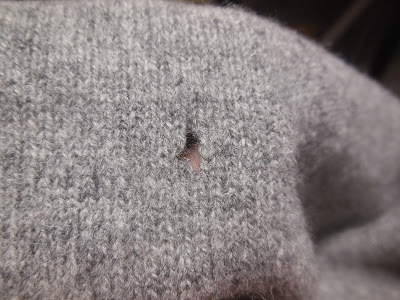 Ordinarily I mend holes in sweaters with a bit of ultrasuede, sometimes a plain old square in the same color, sometimes a fancy heart or star in high contrast.  But I didn't think six or seven ultrasuede appliques would look very chic.  Then I got a brainstorm, to felt the holes together.  It might not work, but what did I have to lose?

My friend Alyce lent me her felting needle and threw in some gray roving, which was a shade darker than the sweater.

I decided to start with the smallest and most unobtrusive hole, one in the back near the side seam, frequently concealed by the wearer's arm.  I pulled the fabric together to close up the hole, laid roving over the back, and felted just a little from back to front.  The felting needles pushed the fibers almost a half inch up past the surface of the sweater. 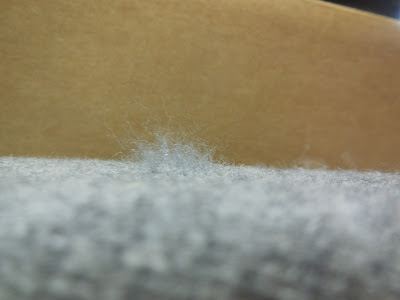 Then I flipped the sweater over and felted from front to back, making those wafting fibers lie down and meld into the knitted surface.

The first hole I mended didn't look exactly right; even though I pushed the edges of the hole together, there was still a gap, and the darker roving showed through.  So I went on a search and found some variegated novelty yarn that seemed to have wool parts that were exactly the right shade. 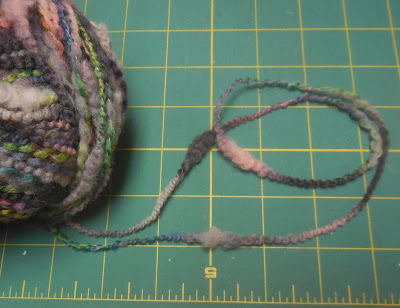 I had to unwind the two-ply yarn, separate out a blob of the right gray, then cut off just a bit -- perhaps the size of two grains of rice -- and put it into the moth hole.  Then I laid the roving over the back and felted as before.

This worked great -- the correct gray filled the hole and got felted into a smooth surface, while the roving gave stability on the back side. 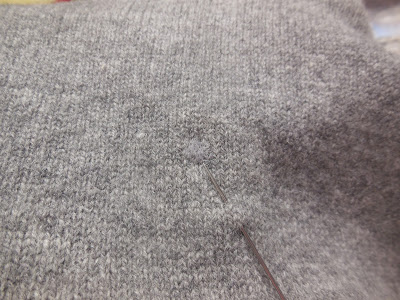 Here's what the finished mend looks like.  The needle points to the mended place, which would be hard to find unless you were really searching, and will never be noticed by anybody other than me.

If you have a wool sweater with moth holes, I highly recommend this method.  It took me perhaps a half hour to mend six or seven holes, including yarn-search time.  The only hard part is finding the exact shade of wool to fill in the gap.  But many sweaters come with an extra button and a little length of matching wool, which would be plenty to mend several smaller holes or one substantial one.