Good in the studio


Over the past several months I've been cleaning my studio, not because I've had a sudden attack of tidiness but out of necessity.  I have four fluorescent light fixtures in the studio, and they have been dying one by one.  When you lose one, you live with it, even if you can't see your design wall that well, and when you lose the next one, which happens to be the one over the work table, you start thinking about calling in the electrician.  But then you notice that your work table is silted over with two feet full of stuff, and you realize that the electrician isn't going to be able to get to the fixture to replace it.

So since Christmas I have been trying to get the worktable and its surrounds clear enough that I could have an electrician come in and replace all the fixtures.  Even the ones that (currently) were still working!  What a luxury!  Finally the moment arrived.  Look at him sitting on my worktable, with nothing besides him on the work surface!  (Well, at least in the area where he had to work.)

We put in LED fixtures and I am assured I will never have to change them out within my lifetime.  The studio is now bathed in light; things I haven't seen properly since last summer are radiantly in play. 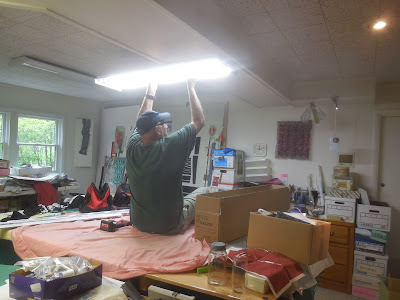 It's not yet what many people might call "clean," but it's so beautiful that I can't believe it.