Crabby again.  Yesterday's New York Times had a big story in the business section about Etsy, which is undergoing culture shock after new management took over.  The story was interesting and extensive, but I fixated on the photos they chose to illustrate it.  The online version sticks to photos of the people mentioned in the article, but the print version includes pretty shots of thread, scissors and cones of yarn, meant to put us in the mood of handcrafted stuff. 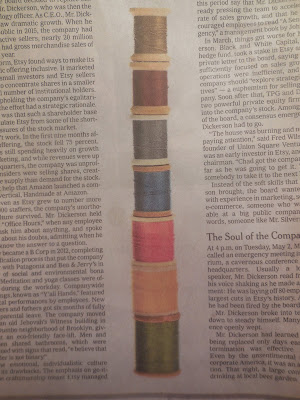 Well, that's fine, except for the thread.  Take a look at this photogenic display -- seven spools in a cute stack.  Except that four of them are wood!

When's the last time anybody making crafts to sell online used thread off a wooden spool?  Answer: never, because wooden spools went out of circulation before the internet was invented.

And the other three spools also look suspiciously old.  The gray thread appears to be on a styrofoam-like spool, which I seem to remember from the 1990s; the pink and yellow look like Coats & Clark plastic spools from a decade ago, before they switched to a tall, skinny format.

I wonder where the photographer came up with these antiques?  And I wonder why he (yes, it was a he) thought that would be a better way to illustrate modern commerce than the actual products that people use today?  I guess it's part of that stereotype that links sewing with pioneer days, grandma stitching on the treadle machine by the light of the oil lamp.  Yuk.

Posted by Kathleen Loomis at 5:04 AM