In the olden days, toys were from a different planet than they are now.  For one thing, there weren't so many of them, and for another, they weren't made of plastic.  I have only two really old toys, which I suppose belonged to my dad and his brother.  They're small, just two inches tall, and now they live on top of the type case in my living room in a prime display spot. 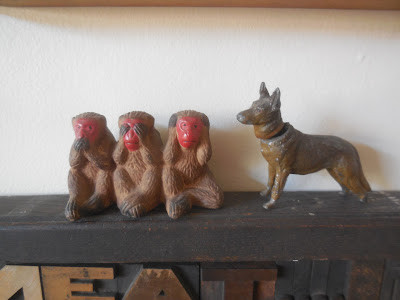 The three monkeys are made of ceramic, stamped "Made in Japan" on the bottom, which probably means they were produced between 1921 and 1941 -- I suspect closer to 1921 because the boys were little then.  Remarkably they are still bright and unchipped after decades of being played with.

The painted metal dog, made in Germany (appropriate, because he appears to be a German shepherd), has an extra attraction: his head bobs on a spring.

I don't have many things from my parents' childhoods -- a doll quilt from my mother, these two toys from my dad.  So these are special.