Consider the humble beer mat.  While the customary American beer mat is inscribed with the name of the restaurant or bar, the customary European beer mat, like the customary European beer glass, is inscribed with the name of the beer.  When we lived in Germany in the 1970s we started acquiring beer mats by accident, and some time later I started acquiring them on purpose.  I own several dozens, small piles of them conveniently situated around the house within reach of any place you might ever want to sit down and park your drink. 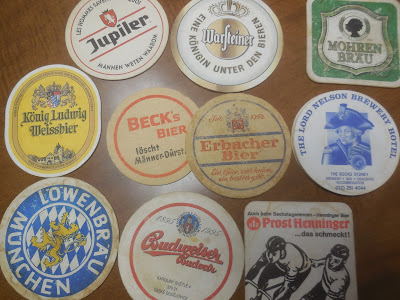 Since I've been officially collecting (a much nicer word than stealing, don't you think?) beer mats I have gotten many that are in relatively virgin condition, but the most precious are the ones that have been with us since Germany.

It's amazing how tough those old mats are -- some of them are kind of beat up, and some have faded a bit, but they keep on trucking.  Some day I may retire them to use as art materials, but for now I'm just as happy to use a vintage mat as a nice new one.  Although I don't remember exactly where and when I grabbed most of them, they bring back fond generalized memories of pleasant hours of leisure and cameraderie.