I don't know much about Etsy, having neither bought nor sold there, but Leigh's comment on my last post seems to ring true.  She wrote: "In some ways, that stack of thread is symbolic of exactly what Etsy has come to be.  Some guy who doesn't know jack about handcrafts trying to exploit the "warm fuzzy handmade" image to make a quick buck..."  If you either buy or sell on Etsy I recommend you read that NYTimes article.

But what I want to talk about is the thread.  Several people left comments on that post about finding old wooden spools and sewing with the thread.  Conventional wisdom holds this to be a no-no, because thread does get old and lose its strength.  If you pull a length of thread off an old wooden spool and give it even a half-hearted yank, it will break.  Obviously that is not a good quality if you are sewing a pair of pants or a hammock, or even a functional quilt that you think will be tugged and folded and occasionally washed.

But if your thread is only used for things that will not be handled, or only for decorative purposes, who cares if it's weak?  I realized this several years ago when I was sewing a lot of "postage stamp" quilts, where each little bit is densely quilted before they're all sewed together in a grid.  I started  using up my old thread for the quilting, which was great because I needed lots and lots of it and didn't really care what color. 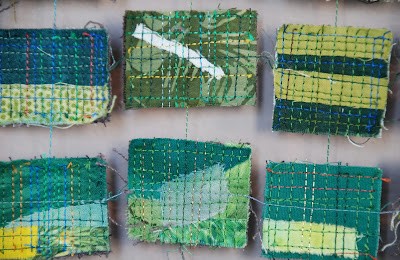 I don't sew the thread off my hundreds of wooden spools because I love to display them with the colors intact, but I certainly use anything on plastic.  Really cheap thread makes a mess as a top thread, because multiple trips through the needle hole pull off a lot of lint, but it works fine in the bobbin. 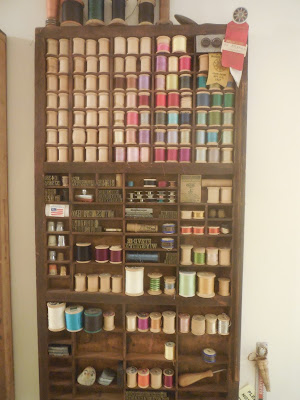 So if you find yourself with a lot of old thread on hand, whether by inheriting it from your mother's sewing box or because you don't turn over your own stash very quickly, do not feel compelled to throw it out.  Use it!  Except for hammocks and pants.
Posted by Kathleen Loomis at 5:21 AM