Two years ago when I did a daily drawing, I bought a couple of sketchbooks that I really liked.  Each time I went through a sketchbook I would buy a slightly larger one for the next volume, gradually forcing myself to draw larger and larger as the year went by; the largest one was 6 x 8".  So when I decided on the map project for this year I thought that some of my daily pieces would be sketches, and again I bought a slightly bigger book -- this one is 6 x 9.

I called this Book 1 and decided that it would hold any kind of sketches, either totally imaginary maps, accurate maps depicting (perhaps) my travels that day, or chimeras that combine real and imaginary components.

I'm starting slow, still finding my balance, so it's not surprising that I returned to comfortable  patterns that I did many times during my year of daily drawing.  Several of the sketches have shown imaginary lands and cities in different scales, much like those I drew two years ago.  I was happy to see that my Micron pens in many different colors have not dried up in the interim, even though I have rarely used them. 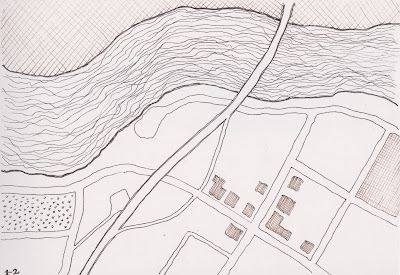 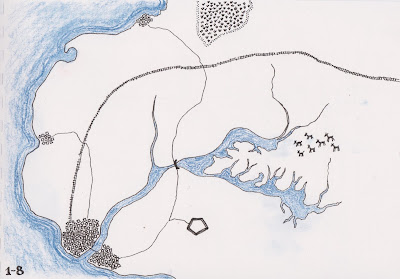 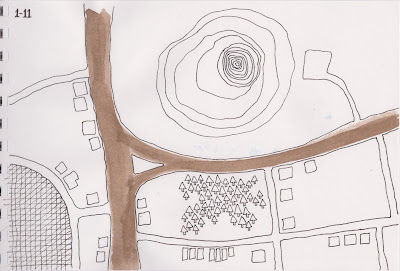 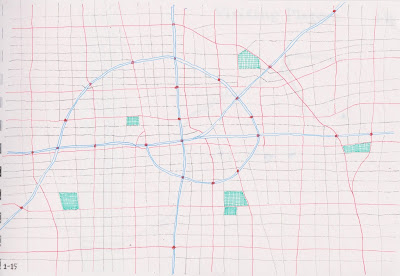 When I was an early teen I would spend many hours drawing maps of imaginary cities.  As I recall, they were pretty boring cities, set out in rigid grids.  I especially liked naming all the streets.  I'm not doing that in my current maps, although I confess to sometimes thinking about potential street names when I'm walking, and I'm partial to alphabetical patterns so travelers can tell immediately that Maple Street is only one block beyond where they are now on Locust.

Hmm -- maybe that's an idea for a future day's map.

I'll show you more of my sketchbook maps in the next post.